Is it really that bad?

So where are all the breadlines of the 1930s? 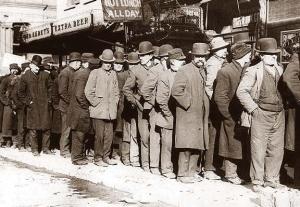 Many politicians (especially those over 50) may say that yes, we had a recession, and yes the world is changing, and it’s harder to get a job. But we have modern economic planning, and quantitative easing, and stimulus packages, and eventually if we just take our medicine and have patience and faith in the system, things will get better. Well, look at the overall employment rate (includes part-time employment):

And look at the employment rate itself:

Does that look like a recovery to you? It looks to me that despite all the spending, and despite all the medicine, employment prospects are getting worse. According to the New York Times†, the U.S. Government has made commitments of $12.2 trillion, and spent $2.5 trillion, and look! The Employment rate is still slumping.

So where are the breadlines?

Found them! The same principle applies in Britain, around Europe and throughout the developed world. Instead of engaging the problem of falling economic participation, the poor are becoming ghettoized and hidden away while governments hope that if they spend enough money guaranteeing debt and supporting big business then the problems of unemployment can be contained.

What is the real problem? 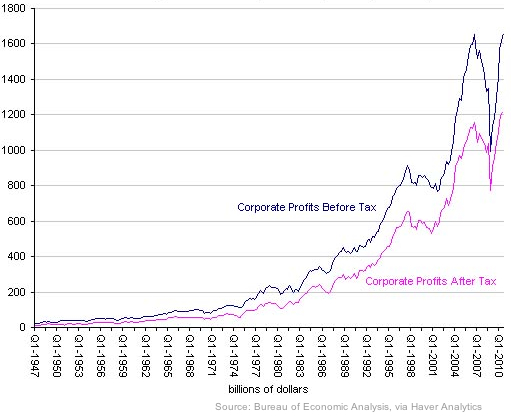 As we can see, corporate profits had no trouble whatever bouncing back from the crash. And unlike the employment rate, they were not in a slump going into the crash. But the problem is not contained to corporations making too much money. The real problem is that governments have been convinced that the health of the economy should be measured primarily by whether or not corporations are doing well.

This means that when governments act, their actions are tailored toward assisting corporations, not assisting individuals or communities.

In my next post in this series, I will go into depth in explaining why and how this is the case, and why this situation is terrible for everyone.

That’s all for now.

35 thoughts on “Economics for the Jilted Generation…”