This is a strange and beautiful crisis. For the last century, at times of change and instability, nervous investors have traditionally piled their money in two directions, into Treasury Bonds, and into cash. This time, the fortifications underlying the entire financial system are straining beneath the weight of change, the weight of systemic debt, and the rise of China, Brazil, India and Russia. From The Economist’s resident cartoonist, KAL: 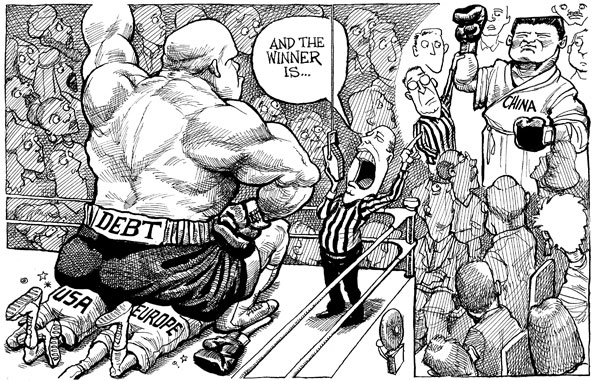 And the most common response to these wild and whirling winds of change is money flowing into the asset class that has just been downgraded, the US Treasury, slashing yields by half a percent. Why? Because it is the most widely traded and the most liquid asset in the world. Put money in Treasuries — goes the common logic — and you will get your money back. The United States Treasury cannot, will not default. Why? The answer has been spoken explicitly in the past few days, most prominently by former Federal Reserve Chairman Alan Greenspan: 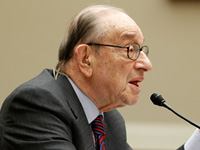 The United States can pay any debt it has because we can always print money to do that. So there is zero probability of default

Sadly, Chairman Greenspan is sorrily wrong. There are others kinds of defaults, and currently one is ongoing as a policy choice. With rates low, it is only necessary to have a small rate of inflation for real rates to be negative.

So are real interest rates really negative? It depends how we measure inflation. A huge aspect of my economic case is that — really — there is no such thing as a uniform inflation (or uniform inflation expectations), because there are different rates for different people, different communities and different strata of society. For welfare-recipients on a fixed income, food and fuel make up a much higher proportion of their income, leading to a much higher inflationary rate. For large corporations importing vast quantities of goods from China, inflation is undoubtedly lower. But no matter who you are, the rate of inflation is high enough to yield a negative real rate on cash.  On Treasuries, this is not necessarily true. But real rates on Treasuries are undoubtedly close to zero, if they are not negative.

Of course as I noted above that is the point of the zero interest rate policy: it is designed to spur holders of cash and Treasuries out of merely holding onto wealth, and instead into more productive ventures. The ostensible goal of the Federal Reserve’s policy, at this stage is to gradually increase productivity, output and unemployment and kick the can down the road for long enough to be able to get the burden under control. This is why Bernanke has called for further fiscal stimulus, as well as continuing monetary stimulus. In this environment, cash and Treasuries cannot be king, because cash and Treasuries are being deliberately throttled (even as the market deludes itself by pushing them to ever-greater heights).

What is king? Returns above the rate of inflation, at least. Right now that includes gold, silver, stocks from various countries and continents, and corporate bonds — so long as they are not in default. But in the long run, the winner will be quality productive assets built around solid companies, solid entrepreneurs, solid products and solid ideas. Value investors have known this for an eternity. But in tempestuous markets, getting in at the right price and at the time is difficult. That is why so many investors are waiting on the sidelines in cash and treasuries.

18 thoughts on “Why Cash Is Not King”