[Today[ U.S. stocks fell, capping a fourth straight weekly slump for the Standard & Poor’s 500 Index, as the cheapest price-earnings ratios since 2009 failed to lure investors amid concern the global economy is weakening. The yen touched a post-World War II high against the dollar.

The S&P 500 dropped 1.5 percent to 1,123.53 at 4 p.m. in New York, after rising as much as 1.2 percent. The Stoxx Europe 600 Index fell 1.6 percent to its lowest close since July 2009. The Japanese yen reached 75.95 per dollar, its strongest postwar level as investors sought refuge in the currency. Oil fell 0.1 percent as it also swung from gains to losses. Gold futures topped $1,880 an ounce for the first time. Ten-year Treasury yields were unchanged after reaching a record low yesterday.

Citigroup Inc. and JPMorgan Chase & Co. lowered their growth forecasts for the U.S. economy. German Chancellor Angela Merkel stepped up her rejection of jointly issued euro-area bonds, following speculation the European Union will start joint bond sales. Technology stocks in the S&P 500 retreated 2.8 percent, the most among a group of 10 in the index, as Hewlett- Packard Co. slumped 20 percent, its biggest drop since at least 1980.

That is a superficial overview. When we watch the markets day-to-day, when we watch the day-to-day price of gold and currencies, we are seeing the frothing, foaming, bubbling surface of the lake. To understand the real picture we have to get into the submarine, and journey down under the waves to survey the lake floor. In 2011 there has been a crushing bearish trend: 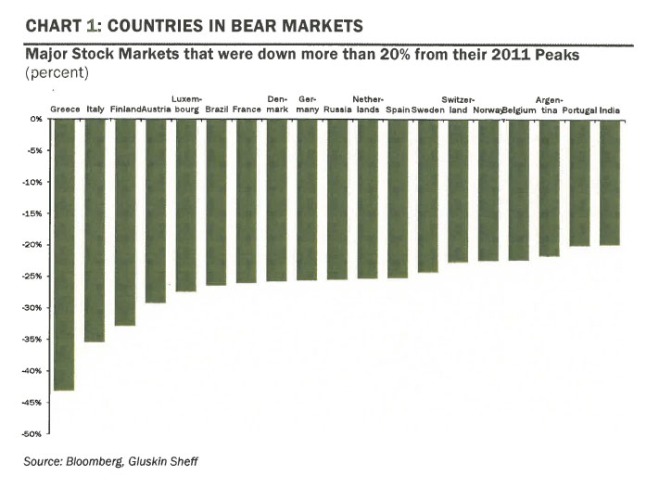 As markets crunch so too do social conditions. Riots in Britain, Greece and Portugal, revolutions in the middle east, car burnings in Germany, ghost cities in China. The spectre of long term unemployment, welfare dependency, the crushing conditions of biflation, the downgrade of American debt, the fragmentation of debate. The world is in a deep, dark slowdown. But why?

In my eyes, most of the problems in the West boil down to one thing: lost ambition. There are other problems: over-reliance on experts, the failure to address underlying social and structural problems, corporate handouts, the dominance of the military industrial complex, over-reliance on the service industries, the failure of government and industry to engage with the young. But really, all of these problems could be addressed with a re-energised sense of ambition, a new and invigorated narrative, and a new sense of direction. The reality is that on the street, everyone feels like things are getting worse, and for good reason. Rising food and fuel prices, the export of jobs, corrupt government, ostentatious bankers. Nassim Taleb said tonight that “The tumour at the centre of everything is the agency problem. When bankers do well, they get a bonus. When everything blows up, someone else pays for it.”

We were crying out for a new invigorating direction in 2008, and then we got President Obama — who crushed our dreams and aspirations by reneging on most of his campaign rhetoric.

In times like these — when the great swathe of humanity is lost in the wilds — heroes and villains are made. Humanity turns to charismatic leadership — storytellers, people who give us new visions, new ideas and new directions. Sometimes — like Gandhi, JFK and George Washington — these characters bring people together and inspire us to put men on the moon, to create new infrastructure, to build bridges, to invest in new technologies, and to put faith in the future. At other times — like Hitler and Mussolini — these characters exploit division and turn humanity in on itself, setting person against person, nation against nation, creating violence, hatred, destruction, tyranny and genocide. My generation grew up safe in the knowledge we would never create another Hitler. We believed in a variant of what Francis Fukuyama called The End of History — that we had risen above the surging swamp of human history, and had reached a new plateau. I still hope we have. But as the Great Crunch toils onward, as we lose faith in the future, all of that is at risk.

14 thoughts on “The Great Crunch”