Have you been buying gold and silver? Lots of people, businesses and countries have — yesterday gold shot to a record $1880, on concerns about just about everything. Buyers clearly think they must be getting a good deal — but so did that those who bought at the apex of the dot com bubble and who then watched their investments crash into a heap. So is gold high or low? Certainly it is higher than it has been — gold has shot up over 500% since 2001. But if it went up another 500% prices today would seem pretty cheap.

Sticking your neck above the parapet often means you get splattered by tomatoes, whether you’re right or whether you’re wrong. I greatly enjoy getting attacked by those who resort to name-calling, but being misquoted is very annoying. A recent dispute regarding Paul Krugman had an adversary accuse me of saying that “gold is high”. Really? Gold is high? Compared to what?

That’s $115 trillion stacked in $100 bills, or the total U.S. debt — public and private — as of July 2011. If the amount of money in the economy shoots up way faster than gold, and demand for gold remains relatively constant, then the price of gold will rise: 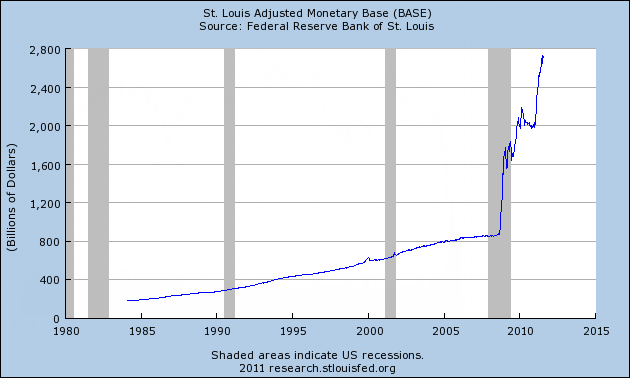 And that’s the monetary base. Bernanke pumps money into the economy — via the primary dealers and their commodities and forex desks — in the hope that it will circulate and bring much-needed productivity gains. And if we had productivity gains then people would become more confident about the economy,  spending and investment would rise, we would have growth, and demand for gold — the hedge against everything — would fall. The problem is that any productivity gains from quantitative easing and the stimulus packages have been offset by pessimism, by food and fuel inflation, by the sovereign debt crisis in Europe, Asian deflation, Keynesian liquidity traps, geopolitical instability, resource wars, and the decline of the dollar. That’s if we had any productivity gains at all. So confidence and productivity are falling, and worst of all the ultimate haven for the last sixty years — US Treasury debt — has been left marred by Chinese downgrades, S&P’s downgrade and America’s failure to come to terms with its debt, oil dependence and import addictions. In that context gold has emerged as the ultimate haven: a form of wealth that cannot be debased by money printing. Here’s gold against currencies in the last ten years:

And without the real and sweeping infrastructural reforms that I advocated last week — widespread solar energy, synthetic oil, carbon scrubbing, ultra-high speed internet, 3D printing, a reinvigorated transport network, improved food infrastructure, re-industrialisation and so much more – the foundations will become shakier, fiat currencies will become more debased, and people and institutions will seek solace in gold pushing the price up further.

And — yes — if America truly rises to the challenge in the next two to five years and transforms itself back into the world’s greatest industrial behemoth, then gold is in a bubble, and will probably see a peak of around $3,000 an ounce, and a sharp fall back. But what prospect is there of that? It would require a complete about-face from government and private industry, an end to extending and pretending, to wasteful imperial conquest, and to the excesses of military industrial complex and corporatism. It would require government to stop bailing out banks, or at least institute a proper firewall of separation between investment and retail banking. It would require its citizens to ditch their widespread addiction to junk food and reality TV and instead focus on engineering, urban farming, solar energy, and entrepreneurialism. It would require Wall Street to cease operation as asset strippers and money-changers and assume their proper role as investors and job creators. Much prospect of that?

Not really. Civilisations need to be shaken before they awaken to their problems. From the decline of Rome and the Qing dynasty, Niall Ferguson extrapolated this: 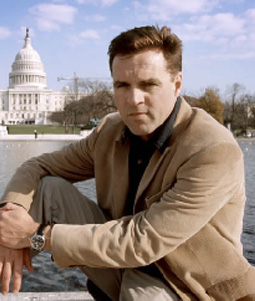 Imperial collapse may come much more suddenly than many historians imagine. A combination of fiscal deficits and military overstretch suggests that the United States may be the next empire on the precipice.

And my analysis suggests that he is right. A full-on imperial collapse, the death of the dollar as the global reserve currency, and global humiliation may be the thing to wake America from its trance, and impel it to do the right thing. If any country in world history can survive this, it is America. But as we teeter on the edge of the precipice, gold is still very, very cheap. If America had to back every dollar in its money supply (M2) with its gold reserves, each ounce would be worth over $9,000. It looks like things are going to get pretty heavy.