Angela Merkel says that Europe won’t issue Eurobonds, presumably heeding the warning that handing over 133% of German GDP to bailing out PIGS may not go down so very well with the German taxpayer. From Bloomberg: 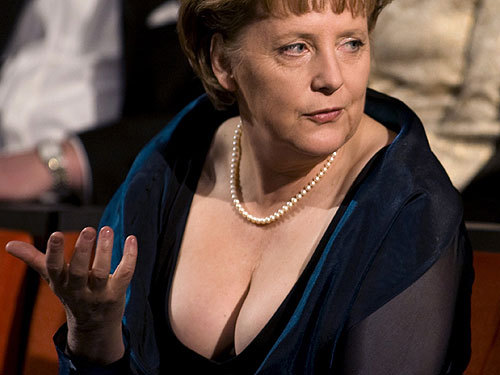 German Chancellor Angela Merkel attempted to shut the door on common euro-area bonds as a means to solve the debt crisis, saying that she won’t let financial markets dictate policy.

Joint euro bonds would require European Union treaty changes that would “take years” and might run afoul of Germany’s constitution, Merkel said. While common borrowing might arrive at some point in the “distant future,” bringing in euro bonds at this time would further undermine economic stability and so they “are not the answer right now.”

“At this time — we’re in a dramatic crisis — euro bonds are precisely the wrong answer,” Merkel said in an interview with ZDF television in Berlin yesterday. “They lead us into a debt union, not a stability union. Each country has to take its own steps to reduce its debt.”

The real question, though, is whether there will be a European Union left in the “distant future”, or just a giant sucking sound. Three weeks ago I wrote:

The problem is excessive borrowing by European governments, and the basic and simple fact that a Europe-wide monetary policy can never be tailored to the economic and budgetary requirements of individual nation states. The panic is that the debts will never be repaid, and that creditors will incur massive losses, sending shockwaves of further defaults around the globe. The European Monetary Union is a strange and bloated mish-mash of industrial dynamism and low unemployment (Germany and Scandinavia) and excessive debt, bloated budgets and huge unemployment (the Mediterranean).

The reality is that Europe can go one of two ways: disintegration, with the return of national currencies, and the demise, or partial demise of the Euro; and full integration, where nations give up their budgetary control to Brussels, which produces an integrated budget to match the integrated monetary policy.

So which will it be, Angela and Nicolas? Full-monetary union, or disintegration? As with most crises, doing nothing and hoping the crisis will simmer away is not really an option. Doing nothing — burying heads in the sand — means disintegration and-or a botched rescue program. European banks are severely under-capitalized. From Bloomberg: 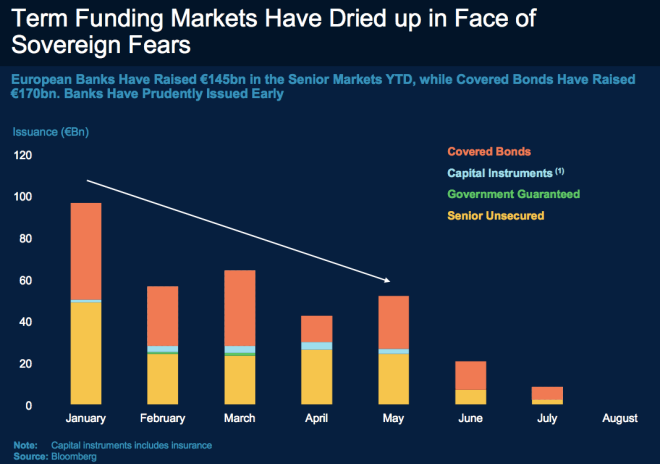 And I suppose that gives everyone more reason to panic, falling into the necrotic arms of a liquidity crisis, and a full-on crash. Perhaps it is the time for decisive action to end this uncertainty — like calling time on the Euro experiment?