Yesterday, I wrote about the problems with the system of Military-Keynesianism, and made the case that not only did war spending not get us out of The Great Depression but that the more general post-WW2 program of massive military spending was a failing policy in terms of creating ongoing economic prosperity. There are two leading reasons for this. Firstly, the massive debt acquisition, which creates an ever-growing leech on the taxpayer, and nation. Second, the huge sums that go toward building bombs, and aircraft carriers and guns that could instead go to domestic wants and needs. This is a huge and convoluted topic, but the first thing we have to understand is that what we are examining is a global infrastructural system. From Business Insider:

From bases in Europe, the Middle East and Asia, the US military protects the world’s shipping lanes, making sure the clockwork of the global economy runs smoothly and goods and oil can be shipped to and back. This is the part of the global American military footprint that actually matters, not the wars.

But even a cursory look at world history shows that this is exceptional in the history of the world. The reason why this happens is because there is a benign, global military hegemon which ensures the security of the world’s shipping lanes, on which the globalized world economy, and therefore the U.S. economy, depends. 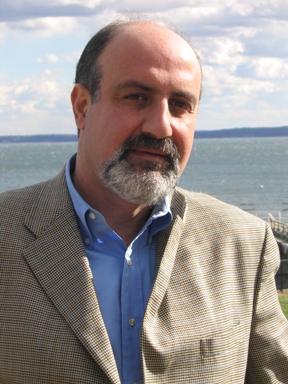 It’s like saying a bridge is fragile. I can’t predict which truck is going to break it, so I have to look at it more in a structural form — what physicists call the percolation approach. You study the terrain. You don’t study the components. You see in finance, we study the random walk. Physicists study it percolation. They study the terrain — not a drunk person walking around — but the evolution of the terrain itself. Everything is dynamic. That is percolation.

And then you learn not to try to predict which truck is going to break that bridge. But you just look at bridges and say, “Oh, this bridge doesn’t have a great foundation. This other one does. And this one needs to be reinforced.” We can do a lot with the notion of robustness.

The question that we have to ask is — if the status of America as global hegemon and protector is like a bridge, then is it a sturdy and stable bridge? What kind of truck travelling over it might break it and cause it to collapse? Well let’s have a look at the American economy. As I noted in my article yesterday, there has been no real growth in the United States since 2007, unemployment is persistently high, food stamps participation is rising, reliance on Arab oil and Chinese manufacturing is ever-present and road infrastructure is worsening. Without the Federal Reserve printing gobs of dollars of monetary stimulus, the US would default on its ever-rising debts now totalling 360% of GDP, most major banks would crash, and most major automakers would go out of business. While the American military retains its status as the mightiest fighting force on earth, with the most ships, the most nuclear weapons, the most carriers, the most aircraft, and the most sophisticated battlefield and surveillance technology, America strains underneath the great hulking weight of financing such a behemoth. Some say that all that strain is worth it:

Saudi kings and Greek shipping magnates don’t pay for the security that the US provides. And the U.S. is paying for everyone else’s security. But actually, the U.S. gets a lot more out of it than it spends, because it gets to be at the center of safe, global free trade.

What America gets out of it is deindustrialisation, as American manufacturing and resources become increasingly uncompetitive in the global and domestic markets. Look at America’s oil production and imports:

Jimmy Carter promised that America would never import more oil than in 1977, but in reality America is increasingly reliant on cheap oil. If the global infrastructure were to break down from some massive unexpected event, or crisis, America would be significantly short of fuel. But what about American manufacturing? From Forbes:

Galina Hale and Bart Hobijn, two economists from the Federal Reserve Bank of San Francisco, did a study showing that only 2.7% of U.S. consumer purchases have the “Made in China” label. Moreover, only 1.2% actually reflects the cost of the imported goods. Thus, on average, of every dollar spent on an item labeled “Made in China,” 55 cents go for services produced in the United States. So the study trumpets the finding that China has only a tiny sliver of the U.S. economy.

So no problem, right?

Well, not exactly. The tiny sliver happens to be the sliver that matters. What economists miss is what is happening behind the numbers of dollars in the real economy of people.

Decades of outsourcing manufacturing have left U.S. industry without the means to invent the next generation of high-tech products that are key to rebuilding its economy, as noted by Gary Pisano and Willy Shih in a classic article, “Restoring American Competitiveness” (Harvard Business Review, July-August 2009)

The U.S. has lost or is on the verge of losing its ability to develop and manufacture a slew of high-tech products and components. Amazon’s Kindle 2 couldn’t be made in the U.S., even if Amazon wanted to:

This is true for many components and products — the jobs, and the ability to manufacture them, have been exported to China, while America has retained higher-paying financial and creative jobs. So not only has America made itself dependent on oil, it has also made itself dependent on external manufacturing infrastructure: infrastructure that does not exist in the United States. Although America does manufacture most of its own food, even this is vulnerable, due to dependency on oil and oil infrastructure.

While this system might mean surging profits for globalised corporations like Apple and Nike, it leaves the United States extremely vulnerable to unpredictable externalities — like a war between India and Pakistan, a megatsunami, a war between Israel and Iran, or Sino-Russian obstruction, or any number of black swans. As we saw with Fukushima, Hurricane Katrina, the 2007 Wall Street Crash, “one-in-a-billion” events are frighteningly common. And America is not just dependent — it is now dependent on huge creditors, ideologically hostile to liberal democracy, and unhappy with contemporary American monetary policy. So the current world order is not working for America — a huge strain of debt is weighing onto an American policy that — more or less — makes American society and democracy more fragile and less self-reliant.

But is abandoning America’s role as world policeman wise? Any such withdrawal would shake the present world order. If America scaled back its global military commitments — and other nations and institutions only picked up some of the slack — the high seas might become more vulnerable to piracy, the actions of rogue states and global seafaring infrastructure might deteriorate. Certainly, this kind of scaling down would have to be done slowly and carefully. It would mean higher insurance costs for vessels, and higher priced imports. Fortunately this is exactly what would be needed to make American manufacturing more competitive, and to spur America to develop localisable alternative energy such as wind, solar, hydrogen and synthetic diesel to replace oil dependency. Imported oil and imported consumer goods are in an artificial bubble — a bubble supported by a global shipping network subsidised by the American taxpayer — which effectively makes American industry less competitive.

And with that thought firmly lodged in mind, I give you Trey Parker & Matt Stone, and the great dilemma at the heart of American economic and foreign policy: