I’m always interested to see new business models emerge, and the internet has played a huge role in changing the way society operates, and the way people think about commerce. Online delivery has had a huge impact both on my life, and the way that I shop. If I want to buy something — a book, or a piece of furniture, or a piece of equipment, I can find it online, and order it, and it will arrive at my door. Previously, I had to go to the shop, look around the shop, collect, pay and go home. Now I just go to Google, then Amazon or eBay and the product is in my hands the next day. Now if this is revolutionary for me, it is even more revolutionary for sellers: instead of maintaining expensive retail real estate, they can maintain low-cost warehouses, and increase the range of products they stock . Of course, this new model presents challenges to established retail businesses, and to local government and communities who see town centres increasingly deserted, and more and more physical retailers going out of business f they can’t adapt. But that’s the nature of capitalism: things come and things go depending on what is popular, and what attracts custom.

But there are a certain class of businesses that have not been quite so affected by the online-retail revolution. Businesses like nightclubs, health spas, and restaurants where the physical premises is a huge aspect of the business model. Restaurants can’t establish a warehouse where food is assembled and send it out to the customers’ homes. I am sure McDonald’s have given this serious thought, but it just wouldn’t work — customers want freshly prepared food, delivered to their table in a bricks-and-mortar restaurant. Nightclubs can’t deliver themselves to me either — although the fact that I can stream any music I choose from Spotify and dance around my bedroom is surely a threat to their business model.

The Groupon model aims to shake up these kinds of businesses by offering access to entirely new markets. Groupon signs up businesses to offer huge discounts in exchange for large new numbers of customers. The theory is that everyone wins: customers get a product at a massive discount, businesses get access to new customers, and Groupon gets a portion (typically half) of sales for the hookup. Well on the face of things this model has proven very successful: Groupon is supposedly the fastest growing company in history. Furthermore, it has higher revenues per engaged user than any other major web business including Google: 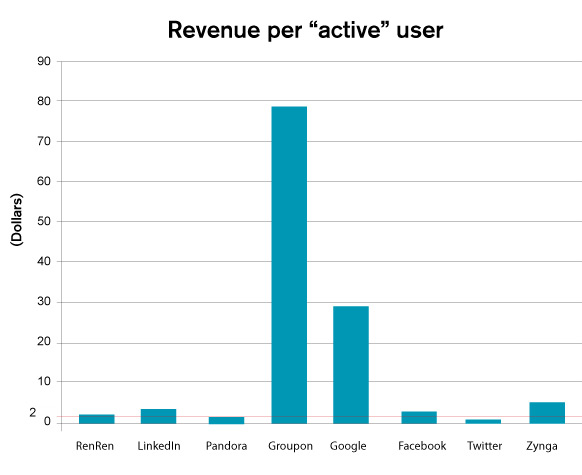 But the problem is that there are very few businesses for which Groupon can sustainably recruit customers. Giving up 75% (that’s a 50% discount, and 50% of the sale to Groupon) of revenue on sales — even to “attract new customers” — cannot be sustainable in the long run. From Jose Ferreira:

And because Groupon’s management won’t release the figures on how many businesses return to Groupon, it is impossible to know just how unsustainable Groupon’s model is. Groupon have successfully generated a whole lot of cash from first-time Groupon merchants — taking 50% of the sale as a middleman is a pretty sweet deal — and have used that cash to recruit more new businesses. But if businesses drop out after one or two deals because they are losing too much money, then those growth figures are illusory. It would come undone simply because not enough businesses will be able to offer deals on Groupon’s terms. There are an awful lot of ways to get new customers — offering a 75% plunge on your margins seems an extremely risky one.

And are Groupon’s management coming to realise that their model is in danger of rapidly losing steam? From Business Insider:

In every year for which we have numbers in the filing, Groupon paid out dividends to its preferred stockholders. In 2010, it also spent $52.9 million to buy preferred shares, despite losing $390 million from operations.

We assume that the preferred stockholders here are Groupon’s founders; usually it’s venture capital investors who have “preferred stock”, but we’ve never heard of a respectable VC asking for dividends of a money-losing startup.

We knew that in Groupon’s past two financing rounds, founders had taken money off the table. But on top of that they also extracted dividends and stock buybacks from the loss-making company. While founders taking some money off the table has become relatively common, and generally for good reasons, Groupon has been extreme. As AllThingsD’s Peter Kafka notes, Groupon has paid out $930 million to employees and investors; astoundingly, out of the $130 million it raised in its penultimate round, $120 million went to the founders’ pockets.

That’s right — $130 million funding, $10 million goes to growing the business, $120 million goes to the founders’ pockets. So while the euphoria grows — particularly around the above graph — it should be patently obvious to anyone with a clue about business that Groupon is falling into a failed model. At very best, it can build up a roster of merchants who can afford the margins, but this roster will probably be thin, and deals may become stodgy and repetitive.

The first real question is “why”? I hinted at the answer above — Groupon’s business model is that of a very big, very greedy middleman — and a very, very big overhead to small businesses who look to recruit new customers. Do middlemen create value? No — they parasitise both the consumer and the producer. And the point of the internet has been largely to reduce the role of middlemen, and reduce overheads. Having a great website and selling directly to consumers for a fair price will reap far more rewards in the long run than signing up for Groupon’s shenanigans. Businesses who use Groupon’s model may have to jack up prices for non-Groupon customers just to recoup what they are losing on all of those new customers, many of whom are the type of bargain hunters who won’t stick around if businesses stop offering steep discounts. They’ll bumble off after whatever it is Groupon (or any of their competitors) are offering at a steep discount.

So in many ways Groupon is a step backward. It may have been founded with the best of intentions, but in light of the fact that its founders are rushing to an IPO to quickly recoup their money and get the heck out of dodge, it seems like this reality is obvious to them. It is not a sustainable business model that offers any new service or product to consumers. Instead it is just a quick and nasty way to generate massive revenues, and massive growth for as little effort as possible and on the backs of other businesses.

The second real question is “how long can it last”? I don’t know the answer, because I can’t guess at what kind of penetration Groupon might get to before it runs out of steam. It is entirely conceivable that the IPO could go well and Groupon’s value could rise and rise by continuing to recruit new businesses for deals. But what is clear is that this growth will eventually hit a huge, impenetrable wall. The only hope for Groupon is that it can leverage its position to drastically change its business model to something more sustainable. But this is not the kind of “branching out” that Google, Cisco, Microsoft and Apple are famous for. Google’s core business — search — is extremely solid. Apple’s core business — hardware — is extremely solid. Microsoft’s core business — software — is extremely solid. The difference between other high-tech companies and Groupon is that Groupon’s core business is a house of cards.