A government-commissioned report led by John Vickers into Britain’s financial system has been published — and its chief recommendation is a separating wall between retail and investment banking. This is a very similar system to what prevailed in America until 1996 under the Glass-Steagall Act of 1933. The chief intent is to prevent the endangerment of customers’ savings, mortgages and pensions through banks’ much riskier and more free-wheeling investment arms. This means that the risky but profitable investment banking sector would no longer be considered infrastructural, and — in theory — would be no longer be eligible for bailouts.

There has been widespread support for a government-backed commission that has recommended UK banks ring-fence retail from investment banking.

The Independent Commission on Banking, led by Sir John Vickers, said it would “make it easier and less costly to resolve banks that get into trouble”.

The ICB called for the changes to be implemented by the start of 2019.

There is no doubt that any measures to take liability for bailing out failed companies away from the taxpayer are in principle a good thing — and I hope nations around the globe take similar steps. But there are some huge problems. Last week I wrote:

The global financial system isn’t working because there are fundamental structural problems with the global economy. These include over-leverage, the agency problem, trade deficits, failed economic planning, massive debt acquisition, Western over-reliance on foreign oil and goods, military overspending, systemic corruption, fragility and so forth. Stabilising the global financial system merely perpetuates these problems. The market shows that it needs to fail — preferably in a controlled way so that real people don’t get hurt — so that we can return to experimental capitalism, where good ideas prosper, and bad ideas don’t.

The real question (and I imagine most of my readers will be informed enough to know the answer) is whether implementation in 2019 will be soon enough to be prevent another round of bailouts. If a similar global firestorm to 2008 were to blow up this week with a run on (for example) Bank of America, would regulators indulge the failed and failing financial system by propping it up? Almost certainly. And that would mean that bad and dangerous business practices have once again been rewarded.

So there is good intent here. But until reforms are in place — and bad businesses are allowed to fail — we are still in a perilous place. 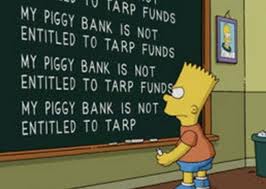 3 thoughts on “Britain Separates Retail and Investment Banking — But Will it Work?”