QE3 has already been priced in so there would be shock. Confidence would plummet, followed swiftly by asset prices, especially the blown-up pufferfish S&P, DJIA and Nasdaq. Two exceptions would be gold, which would shoot up — well above $2000 — and treasury bonds, whose yields would edge ever lower. And plummeting asset prices would mean debt-deflation, leading to more bank failures, and the debt-deflation spiral posited initially by Irving Fisher, and later by Friedman, Schwarz and Bernanke.

And here’s what has happened today.

World stock markets have dropped sharply after a series of grim warnings over prospects for the global economy.

Earlier, the president of the World Bank, Robert Zoellick, said the world’s economy was “in a danger zone”.

The comments came after the Federal Reserve warned that the US economy faced “significant downside risks”.

Mrs Lagarde told a news conference at the IMF’s annual meeting in the US that the “path to recovery is narrower that three years ago,” when developed economies sank into recession.

She said that international leaders must act quickly on fiscal consolidation, the repair of household debt, and reforms of the public sectors. “Time is of the essence,” she said.

One thing that I missed is that while Treasury yields are lower gold hasn’t spiked, and is actually dropping to the support level of $1700: 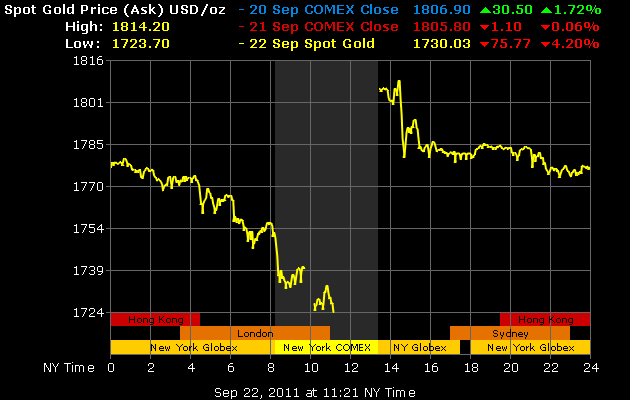 It looks like gold may well be stagnant-to-lower until Bernanke announces QE3. The central-bank-liquidity-dependent markets are heading toward turmoil without further printing, so I have no doubt Bernanke will respond to global freefall with a co-ordinated global interest-free pumping operation, causing assets to levitate, and gold to spike over $2,000. Any promises made to the Chinese central bank to stabilise the value of the dollar would go out of the window, as Bernanke’s true money-printing, aggregate-demand-boosting impulses come to the fore.

Meanwhile, gold might even turn upward before further printing. The main downward pressure is liquidation, as investors seek to gold cash to stave off losses and margin calls that accompany the downward spiral. But gold’s long-term purchasing-power stability will keep a steady stream of money flowing in. There is upward inflationary pressure (driven by food and fuel fundamentals) even without further money printing. Funds and investors will still be keen to safeguard their purchasing power.