According to Buffett: No. 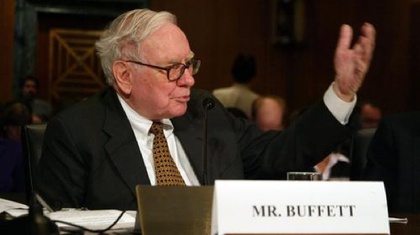 Berkshire Hathaway Inc.’s Warren Buffett, who has sold most of his company’s holdings of European sovereign debt, said his firm isn’t interested in helping to bail out lenders on the continent.

“They need capital in their banks, in many of their banks,” Buffett, Berkshire’s chairman and chief executive officer, told Bloomberg Television’s Betty Liu on “In the Loop” today. “We would not be a good prospect,” he said in an interview from the New York Stock Exchange. He’s received “very, very few” calls about putting capital into European banks. “Not quite none at all,” he said, declining to name any institutions.

On the other hand, I’m pretty sure Warren Buffett will soon be channelling vast quantities of cash (Berkshire is sitting on a $50 billion heap) into European banks at liquidity-crisis prices.

The global financial system is an absurd interconnected house of cards. One falling card (like a Greek default) or ten falling cards (like the European banks who were foolish enough to purchase Greek debt) might just bring down the entire banking system, and its multi-quadrillion-dollar evil twin, the derivatives system.

Well, one insolvent institution that isn’t bailed out means that all of its outstanding debts don’t get paid, which creates huge holes in the balance sheets of other institutions. That’s why a system based on debt is so stupendously fragile. Caution will be thrown to the wind, and salvaging the remnants of the incoherent shit-heap tumbling into the earth and attempting to hold it up will once again become the mode du jour.

And just what might be brought tumbling down in the inevitable cascade of defaults?

Well, taking J.P. Morgan as an example (others are considering Morgan Stanley) just over $90 trillion of liabilities. 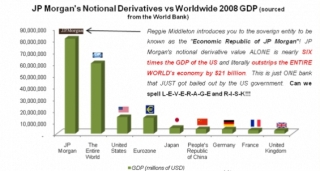 The bailout-crisis-bailout approach is another reason why we haven’t had a real recovery: all the time effort, labour and capital that could have gone into solving the West’s challenges (like energy independence, sustainability, infrastructure, reindustrialisation, job creation) has instead gone into saving a system that at absolute kindest is a theatre of the absurd.

The calamity of 2008 has had practically no effect whatever in reducing systemic risk, or institutional leverage, because politicians and regulators colluded with the banks to prop the system up.

Regulators are repeating the same mistakes and hoping for a different outcome.

Meanwhile, many bankers are repeating the same mistakes and hoping for the same outcome — a massive bailout paid out from the earnings of future generations.

Perhaps eventually it might dawn on the public that the problem is the system, and that to cure our affliction, the system must be allowed to fail.

9 thoughts on “Will Warren Buffett Bail Out the World?”