Modern civilisation has its problems but right now it works. Electrical grids, water systems, mass agriculture, global shipping, the internet, road networks, governments and financial markets are all still functional, and life for the majority is significantly easier and more colourful than for most of history. In the presence of civilisation, most of our basic needs (food, water, shelter, culture) are fulfillable, even if civilisation is highly fragile. 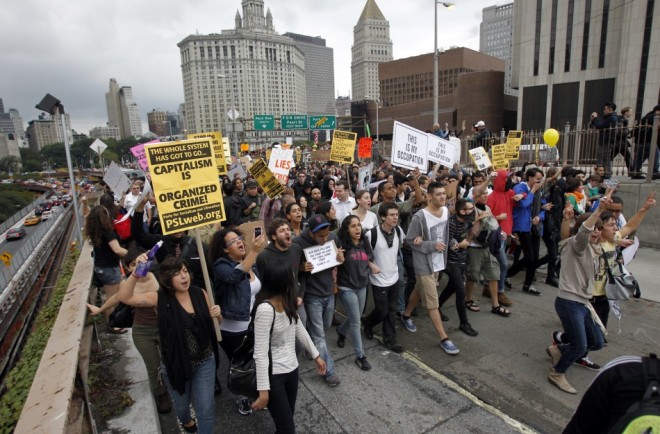 People are mostly angry about some combination of poverty, angry about inequality, angry about rising joblessness, lost civil liberties, the loss of Western manufacturing, economic weakness, bailouts, or simply perceived unfairness. This isn’t a partisan issue; it exists as much in so-called left wing (like anti-austerity protests) and right-wing (Tea Party) camps.

The essential problem (that affects everyone who is not part of the elite) is that while civilisation functionals reasonably well for a vast majority, it functions significantly better for a tiny minority.

If nurses, teachers, soldiers, electricians, tradesmen, scientists (etc) are getting $50,000 a year for their labour, and traders on Wall Street who were bailed out after their businesses failed are getting $5 million bonuses, eventually the majority will start to seethe with questions like “why are they more valuable to society than we are?“, “if they failed to see the last recession coming, why are they still getting rewarded?”, “if unemployment is so high the economic system cannot be working, can it?, and so forth.

Corporations — and by extension, governments — have much reason to be fearful.

Recent protests—Occupy Wall Street, of course, but also the Tea Party movement as it first began—rise out of a profound rage over unfairness in this country. The scale of this unfairness and inequity makes it hard to know where to direct that rage, to know what to do. Occupy Wall Street has the right target; but where their rage will go, nobody today knows. I am certain, though, that any alert board should be instructing their managers to do three things: admit the problem exists, take positive steps to make the corporation function fairly, and consider what other steps would address the concerns of the protests.

Simple? Not quite. But necessary? You bet.

If the present Occupy Wall Street protests do not create an unignorable threat, they certainly raise the prospect of one in the near future. Rage at unfairness is not easily quenched and once started can be hard to curtail. We’ve seen this time and again throughout history. Shareholders may think of themselves as victims of CEO power, as innocent shareholders , but we need only look to the Russian and French Revolutions to see that everyone having anything to do with fallen power, or in this case “guilty corporations”, may be attacked and injured—even if, like shareholders, their only crime is doing nothing.

But the real danger of all of this is not to corporations, or governments, or Wall Street, or the power elite. The danger is to society itself. Corporate and financial hygiene is at an all-time low, and the global financial infrastructure is an interconnected hyper-leveraged house-of-cards ready to come crashing down. The higher joblessness and wage inequality go, the  sooner the smouldering embers of fury we see today will be transformed into a burning conflagration of rage in wider society. If people with electricity, water, food and Chinese consumer goods are getting furious today, while civilisational is still functioning reasonably well, imagine what might happen if another financial crash caused by a Euro-default raised unemployment another 5%? If gasoline costs rose another 50% in response to an oil shock? If a new conflict or war significantly raised the cost of imported goods?

Establishments need to quell the furies of the population before they reach tipping points by letting bad banks and businesses fail, by reforming the tax code so that everyone pays a fair share, by creating jobs, and by finding ways to reduce citizens’ and institutions’ debt burden. Unfortunately, I believe that the global financial and political systems are so entrenched that at this stage deconstruction (rip it up and start again) is impossible because vested interests make any such changes highly unlikely.

The real danger is that in desperate times people will follow any charlatan who can offer food and security. In the 20th Century, Germans, Italians, Russians, the Spanish, the Chinese, the Vietnamese, the Libyans and others all discovered the dangers of overthrowing corrupt entrenched establishments, and replacing them with new regimes with no respect for individual liberties, religious freedoms, the freedom of speech, the freedom of association. I want the revolutionaries of the 21st Century to understand that the problem is not capitalism, nor liberal democracy. The problem is that a tiny minority are rigging the system to enrich themselves.

13 thoughts on “The Dangers of the Era”