It’s long been clear to some of us in the financial kingdom that a small clique of powerful companies control vast swathes of the global economy. 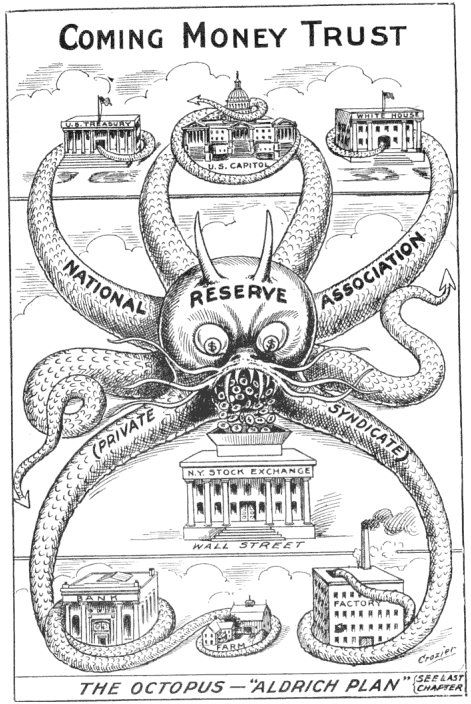 Now that mythos has been given some scientific credibility.

The idea that a few bankers control a large chunk of the global economy might not seem like news to New York’s Occupy Wall Street movement and protesters elsewhere (see photo). But the study, by a trio of complex systems theorists at the Swiss Federal Institute of Technology in Zurich, is the first to go beyond ideology to empirically identify such a network of power. It combines the mathematics long used to model natural systems with comprehensive corporate data to map ownership among the world’s transnational corporation.

The work, to be published in PloS One, revealed a core of 1318 companies with interlocking ownerships (see image). Each of the 1318 had ties to two or more other companies, and on average they were connected to 20. What’s more, although they represented 20 per cent of global operating revenues, the 1318 appeared to collectively own through their shares the majority of the world’s large blue chip and manufacturing firms – the “real” economy – representing a further 60 per cent of global revenues.

When the team further untangled the web of ownership, it found much of it tracked back to a “super-entity” of 147 even more tightly knit companies – all of their ownership was held by other members of the super-entity – that controlled 40 per cent of the total wealth in the network. “In effect, less than 1 per cent of the companies were able to control 40 per cent of the entire network,” says Glattfelder. Most were financial institutions. The top 20 included Barclays Bank, JPMorgan Chase & Co, and The Goldman Sachs Group.

As the world learned in 2008, such networks are unstable.

One thing is clear:

A huge mountain of interlocking, interconnected debt is a house of cards, and a monetary or financial system based upon such a thing is prone to collapse by default-cascade: one weak link in the chain breaks down the entire system. 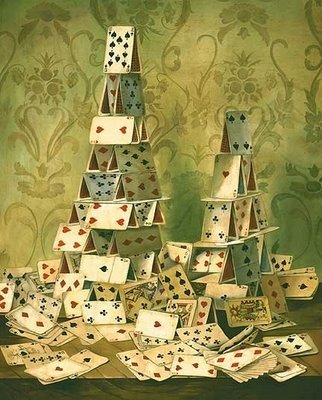 10 thoughts on “Scientists Map The Rulers of the Financial Universe”