From my favourite arch-Keynesian provocateur (and fellow sci-fi fan): 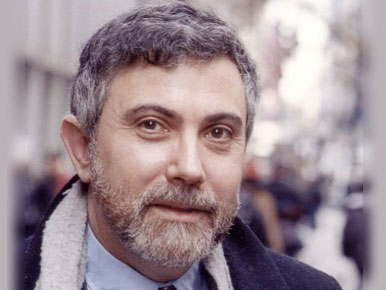 The basic point is that the recession of 2001 wasn’t a typical postwar slump, brought on when an inflation-fighting Fed raises interest rates and easily ended by a snapback in housing and consumer spending when the Fed brings rates back down again. This was a prewar-style recession, a morning after brought on by irrational exuberance. To fight this recession the Fed needs more than a snapback; it needs soaring household spending to offset moribund business investment. And to do that, as Paul McCulley of Pimco put it, Alan Greenspan needs to create a housing bubble to replace the Nasdaq bubble.

He got his wish, and it ended in 2008 with the great crunching, squelching sound of death by delinquency (via securitisation).

But now the housing bubble is coming back — on steroids (or methamphetamine, whichever analogy is more appropriate).

Via the newly-extended HARP (HAARP?) program, for $100 down, under-water homeowners can pick up a $200,000 government-insured loan for “repairs” and “renovations”. That’s 2000:1 leverage — steep even for Wall Street.

A covert stimulus package by any other name — but more importantly, it’s another bailout to creditors who lent huge quantities of money to people who couldn’t afford to repay it.

From Of Two Minds:

President Obama is taking credit for a new government plan to “save homeowners.” That is of course pure propaganda to mask the plan’s true goal: the perfection of debt-serfdom. The basic thrust of the plan is straightforward: encourage “underwater” homeowners whose mortgages exceed the value of their homes to re-finance at lower rates.

This is the Federal Reserve’s entire game plan in a nutshell: don’t write off any debt, as that would reveal the banking sector’s insolvency, but play extend-and-pretend with crushing debtloads by lowering the cost of servicing the debt.

The key purpose of this “plan” is to leave the principle owed to banks on their books at full value while ensnaring the hapless debt-serf (the “homeowner”) into permanent servitude to the banks.

The problem is that with every cycle of government-driven malinvestment, productive capital gets diverted to bullshit that society doesn’t really need. Housing inventories are already overstocked — that’s why prices are weak. Blowing more money at the housing market might shore up too-big-to-fail balance sheets, but it’s not going to make housing any less overstocked. And all of those materials, time, energy and resources going into reinflating the housing bubble could go to things America actually needs — like better infrastructure, and a market-driven alternative energy strategy (sorry Solyndra) to reduce oil dependency.

But — with a financial system filled with junkies who only think about tomorrow — can anyone really be surprised that the Obama administration is employing such a short-sighted vision of economic development? Obama is just giving into the braying mob who live on speculative bubbles at the cost of America’s future.

9 thoughts on “Reinflating the Housing Bubble…”