It looks like I’m not the only political commentator to evoke the spirits of the past on Europe’s current breakdown (or breakdowns).

From the Daily Mail:

Greeks angry at the fate of the euro are comparing the German government with the Nazis who occupied the country in the Second World War.

She wears a swastika armband bearing the EU stars logo on the outside.

The backlash has been provoked by Germany’s role in driving through painful measures to stop Greece’s debt crisis from spiralling out of control.

From a Greek perspective, it seems shatteringly obvious. For them, the Euro has become a battering ram for a kind of fiscal austerity that is set to benefit Germans (price stability) and penalise Greeks (austerity).

As advantageous as the Euro once seemed, it is becoming ever clearer that the union is suffering from deep political fracture. It is a union built without a common language (other than perhaps the belief in bureaucracy — and an unwillingness to give bankers haircuts), without a political head (or even a coherent political structure) without a common culture of work, and without an integrated economy.

That’s why decisive action is proving impossible, in spite of all the rhetoric.

Worse (because it shows contagion at work), it looks like Portugal is about to sink into the mud.

From Ambrose Evans-Pritchard at the Telegraph: 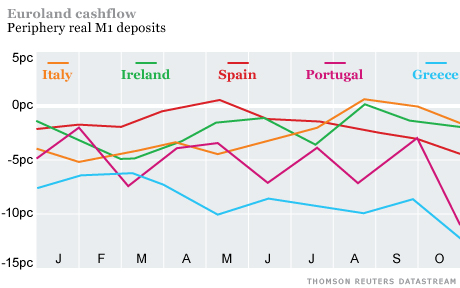 Cashflow problems (making it much, much harder to pay down debt) — that’s what you get when spend-as-much-as-we-want-and-then-print-money mediterranean nations entrust their nation’s monetary to stern-looking austerity-minded German central bankers.

Most startlingly, it looks like Paul Krugman finally got something right:

European leaders reach an agreement; markets are enthusiastic. Then reality sets in. The agreement is at best inadequate, and possibly makes no sense at all. Spreads stay high, and maybe even start widening again.

Another day in the life.

Of course, his solution — much, much deeper integration, with a good dose of money printing — is politically impossible, so whether or not it would work (clue: it won’t) is irrelevant.

Meanwhile Americans smoke their hopium (“GDP is up! Stocks are up! The recovery is here!“) hoping that the whirling Euro conflagration will just go away.

It won’t just go away. The global financial systems is an interconnected house of cards — a full Euro breakdown will bring down American banks with European exposure, like Morgan Stanley. Hank Paulson was telling the truth — either the thing is bailed out (again and again and again) or it will collapse under its own weight.

Creditors — starting with China (who are acquiring gold and Western industrials at a rapid rate) — will be hoping that the system can hold on for a few more years while they try to cash out with their pound of flesh.

4 thoughts on “Old Hatreds Flare Up…”