From Nassim Nicholas Taleb writing for the NYT:

I have a solution for the problem of bankers who take risks that threaten the general public: Eliminate bonuses.

More than three years since the global financial crisis started, financial institutions are still blowing themselves up. The latest, MF Global, filed for bankruptcy protection last week after its chief executive, Jon S. Corzine, made risky investments in European bonds. So far, lenders and shareholders have been paying the price, not taxpayers. But it is only a matter of time before private risk-taking leads to another giant bailout like the ones the United States was forced to provide in 2008.

The promise of “no more bailouts,” enshrined in last year’s Wall Street reform law, is just that — a promise. The financiers (and their lawyers) will always stay one step ahead of the regulators. No one really knows what will happen the next time a giant bank goes bust because of its misunderstanding of risk.

Instead, it’s time for a fundamental reform: Any person who works for a company that, regardless of its current financial health, would require a taxpayer-financed bailout if it failed, should not get a bonus, ever. In fact, all pay at systemically important financial institutions — big banks, but also some insurance companies and even huge hedge funds — should be strictly regulated.

What would banking look like if bonuses were eliminated? It would not be too different from what it was like when I was a bank intern in the 1980s, before the wave of deregulation that culminated in the 1999 repeal of the Glass-Steagall Act, the Depression-era law that had separated investment and commercial banking. Before then, bankers and lenders were boring “lifers.” Banking was bland and predictable; the chairman’s income was less than that of today’s junior trader. Investment banks, which paid bonuses and weren’t allowed to lend, were partnerships with skin in the game, not gamblers playing with other people’s money.

Hedge funds, which are loosely regulated, could take on some of the risks that banks would shed under my proposal. While we tend to hear about the successful ones, the great majority fail and their failures rarely make the front page. The principal-agent problem they have isn’t a problem for taxpayers: Typically their investors manage the governance of hedge funds by ensuring that the manager is hurt more than any of his investors in the event of a blowup.

I believe that “less is more” — simple heuristics are necessary for complex problems. So instead of thousands of pages of regulation, we should enforce a basic principle: Bonuses and bailouts should never mix.

The ramifications of the last crisis was that a failing and failed system was saved, pretty much intact. Yes — changes have been made around the fringes — the end of prop trading, the promise to later implement the Volcker rule.

But the big picture is that very few lessons were learned: the leverage stayed, the algorithmic trading stayed, the casino mentality stayed, and the huge web of interconnected derivatives stayed. state-owned and bailed-out banks have continued paying bonuses far in excess of anything payed to public servants. 2010 was a record year for Wall Street pay.

Is there anything that can address systemic fragility — the core problem — in a system wracked with the greatest debt burden in history? I don’t mean to be fatalistic — and I think we need to try Taleb’s measure — but I think that even a ban on bonuses would be gamed around by the vultures and vampires and cannibals.

I am concerned that the only thing that will really regulate this new hyper-leveraged, hyper-fragile global market is its self-destruction — where “too big to fail” metastasises into “too fucked to bail”, and the entire system collapses, the residual debt is erased, and the system has to be rebuilt from scratch. 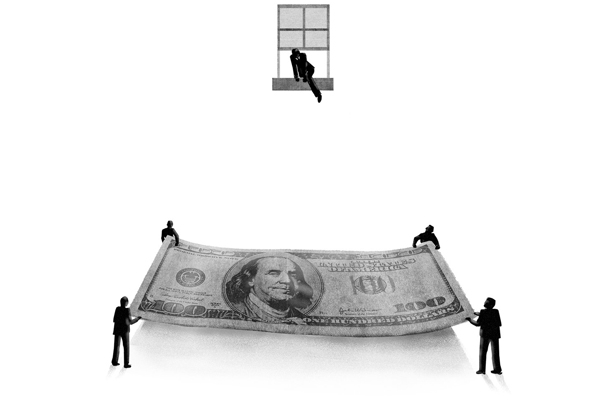 8 thoughts on “Too Fucked to Bail”