Free market disciples are understandably incensed that governments around the world are sending thousands of bureaucrats around the world on junkets (Copenhagen, Durban, etc) to negotiate a framework between governments to impose emissions limitations to solve an issue (manmade climate change) that may or may not cause huge economic, social and geopolitical problems in the future. 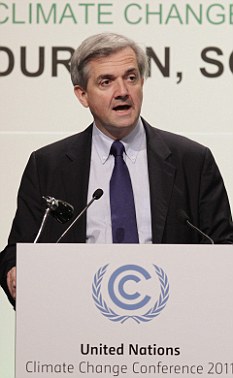 Countries agreed to a deal today to push for a new climate treaty, which will cut emissions in poorer countries, costing British taxpayers £6billion.

But environmental groups said negotiators had failed to show the ambition necessary to cut emissions by levels that would limit global temperature rises to no more than 2C and avoid ‘dangerous’ climate change.

My position on climate change is as follows:

I don’t really have any problem with the idea that a highly active and productive species like human beings can heavily influence our climate. In fact, I think there is a good deal of circumstantial evidence to suggest that we have been doing it for millennia.Over thousands of years a small uptick in greenhouse gases (from agriculture) has warmed the Earth, staving off new glaciation and thereby creating conditions beneficial to the development of modern civilisation.

So my real problem is with the view that somehow humanity can accurately predict future climactic trends via simulations and models. The idea that economies are simply too complex to accurately model applies even more to climates, which are vastly more complicated systems.

While we can’t reliably predict what the precise results of this will be, keeping global greenhouse gas levels close to the pre-industrial ones seems to be a good insurance policy.

Imposing emissions limitations using carbon credits which can then be traded on exchanges is no such thing. Why?

Essentially, the bureaucrats at Durban are wasting their time and taxpayers’ money. Eventually, as the global economic situation worsens, governments will cotton on to the fact that a quick and easy way to create new growth is through spending money on developing renewable energy infrastructure, and the removal of carbon dioxide from the atmosphere through traditional means (planting trees), and non-traditional ones (carbon scrubbing). Unemployed people will be put to work on such schemes.

While this is not particularly sound economics it is significantly better ecologically than the current proposals, because it actually concentrates on the issue at hand (atmospheric CO2) rather than producing a bureaucratic framework that nations can (and will) just flout.

Ideally, we would have a free market where such technologies and systems can organically develop based on economic utility. In reality, we have a global energy market rigged by US military largesse — oil is the global standard, and America spends trillions to keep it cheap and plentiful. Alternative energy cannot compete with a petrodollar hegemon.

Usually, government money is problematic because it misallocates capital. Very occasionally it does something really worthwhile, and anything that works toward getting America off its oil addiction has the potential to be worthwhile. NASA is another example of successful government spending — every dollar invested in the Apollo program yielded $23 of benefit to the wider economy°.

Whatever happens, I’m fairly certain that the meetings, the treaties, and the desperate scrabble for “consensus” won’t be responsible for anything other than wasted time and money.