So, Ron Paul is taking a lead in Iowa:

It seems like Dr. Paul’s message of peace, civil liberties, respect for the constitution, a balanced budget, and an end to bailouts and crony capitalism is really catching fire. So, with Newt Gingrich collapsing, and Perry still in the doldrums, it seems like America faces a real choice between Paul and Mitt Romney — the archangel of American imperial decline, and a staunch believer that corporations are people:

Romney claims that he wants to cut the debt and cut the deficits and then advocates even greater military spending. Gee, that’s just what another “fiscal conservative” George W. Bush did:

That huge red spike of debt during George W. Bush’s term? That’s war-spending; Iraq, Afghanistan, and the 865 foreign bases maintained under Bush. That is the spending — not welfare, not medicare, and not infrastructure — that is out of control.

The reality of the American fiscal picture, as I showed in detail here, is that it is a permanent war economy. America’s greatest exports are war and weapons. When it comes to war and weapons, there is no austerity, and that is a sacred cow even to elements of the Tea Party. Look at the world’s top 10 nations in terms of military spending:

Is that a portrait of fiscal restraint? Or is that a portrait of ever-expanding military spending, flying in the face of the fact that the United States won the Cold war, and has no serious global rivals? And has this huge fiscal spending on war and weapons created a resilient and prosperous economy? No — there has been no real growth in the United States since 2007, unemployment is persistently high, food stamps participation is rising,reliance on Arab oil and Chinese manufacturing is ever-present, road infrastructure is worsening, and so forth. That’s because spending hasn’t been targeted to what people need, but instead to the destructive and perverse racket that is permanent warfare, that serves the interests only of the military-industrial complex.

Humanity has been here before. 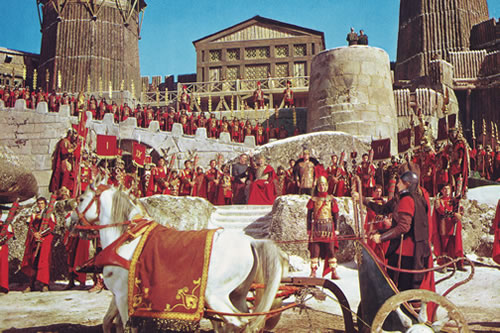 In October, I concluded:

Rome, like America was a distinctly divided empire in terms of social class, in terms of its economy, in terms of ideology, and in terms of geography. Once, the threat of Soviet dominance kept America strong. But no longer. The culture wars are tearing America apart, and America’s imperial grasp for resources is bankrupting the nation’s treasury. Globalisation has ripped the heart out of American supply chains, manufacturing and its labour force. Financialisation has created classes of greedy parasites, and a hungry and furious class of have-nots. Without global goods and oil, a service economy is fundamentally unsustainable.

And that is what this is about — trying to tighten America’s grip on the things on which the American empire is dependent — oil, and foreign goods. Romney’s play is about trying to sustain the free-lunch economics of Nixon and Kissinger instead of undertaking painful and reforms (i.e. energy independence, reindustrialisation, welfare reform, and demilitarisation) necessary to make America competitive in a multi-polar world.

What Romney misunderstands is just how fragile the American Empire is to a global trade war, or an oil shock, or any number of externalities.

More military spending, and subsequent debt acquisition will heavily devalue the already-devalued dollar, which in turn will merely hasten the decline and fall of the American Empire for ultimately the same reasons as Rome: external overreach, internal corruption,religious transformation, and barbarian invasion.

Americans face a real choice. I hope they choose wisely.