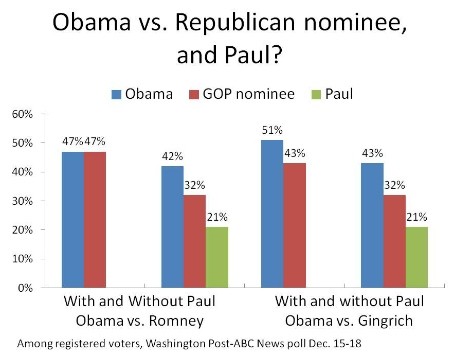 Simply, Ron Paul is just too popular to ignore. Republicans will find it very hard to win with him running as an Independent. If anything, a three-way split might play out even more strongly for Paul, as he can bash both the incumbent and the Republican as emblematic of the establishment — an establishment that more and more is failing America.

Of course, many forces are deeply opposed to Ron Paul, because for better or worse, his small-government anti-Federalist policies are a drastic change from the status quo, and embarrass big-government Republicans like Newt Gingrich, Rick Perry and George W. Bush who claim they want to balance the budget and end up spending a heck of a lot more.

So Paul supporters can expect a deluge of negative claims: claims that he is a racist, claims that his foreign policy is dangerous, claims he wants to return to segregation, claims that he cannot win and is unelectable.

Ultimately, everyone knows that it is the status quo that is more unsustainable than anything else. America is now the most indebted nation in the history of our planet, bogged down in expensive wars and its role as global policeman, and increasingly in denial of her constitution and the principles of her founders. Congress and Obama — as well as extending the reactionary and unconstitutional Patriot Act — have recently signed some of the most reactionary and illiberal legislation ever in the NDAA of 2011, which allows for the indefinite detention of American citizens without due process. Americans voted for Obama hoping for change from the big-spending interventionist corporatism of George W. Bush, and got much more of the same.

Paul’s non-interventionist foreign policy, his civil libertarianism, his strict adherence to the constitution, his rejection of banking bailouts and his willingness to cut spending are not what every voter is looking for, but are a tonic to the disastrous policies of the status quo that are sucking down the American economy.

Of course, many Americans fear radical change. That’s why establishment contenders like Cain, Gingrich, Bachmann and Perry have rapidly risen in the polls and fallen, as voters scrabble around hunting for a viable alternative to the status quo. Paul’s gains have been slow, steady and consistent. This has been in spite of an earlier campaign of media ignorance, and now a campaign of media smears, including the charge that he is either or a racist, or has associated himself with racists.

These media attacks will prove ineffective. Voters are turning to Paul because of his policies, and the fact that he represents a radical departure from what to many Americans is a disastrously failed status quo. He could be the Grand Wizard of the KKK, a shapeshifting Reptilian from Alpha Draconis, or a cross-dressing drug addict, and that would not change a thing because Ron Paul will ultimately be judged on the content of his policies, not superficial smears that have nothing whatever to do with policy.

While some of his stances are unpopular with some segments of the population, there is no other declared candidate from either of the major parties who offers any of the above. None. Ron Paul’s rise is just a symptom of the establishment not delivering to the people what they want, need and deserve.

13 thoughts on “Why the Republican Party Needs Ron Paul”