Is it true that Americans are paying too little tax?

The short answer is no.

Current levels of overall taxation are close to the historical norm. So what’s changed?

Well, far less of the money is coming from corporations, and far more from payroll taxes. That means that a lot of the burden has been switched from corporations to their workers. That puts the power to invest into increasingly fewer hands. The middle classes, who pay the overwhelming majority of payroll taxes are left with less to invest. That means, broadly, that more money gets invested in big business and large corporations and less in small enterprise, who are the greatest job creators in America:

Research funded by the Kauffman Foundation shows that between 1980 and 2005 all net new private-sector jobs in America were created by companies less than five years old. “Big firms destroy jobs to become more productive. Small firms need people to find opportunities to scale. That is why they create jobs,” says Carl Schramm, the foundation’s president.

So while I agree that the top 1% should be taxed more, and the bottom 99% less, what the above graph reveals is that America right now has is a spending problem, and not a tax problem.

Here’s spending as a percentage of GDP: 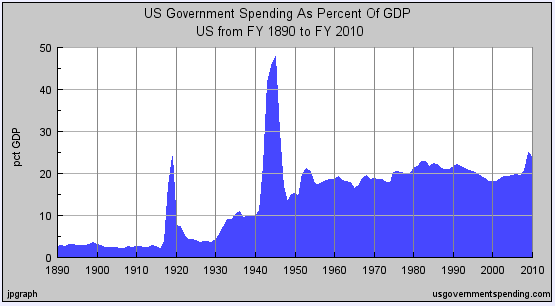 It is spending that is climbing well-above its historical norm. The difference really adds up: 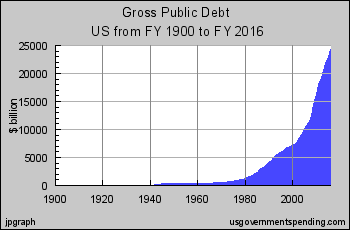 The next American President and Congress will face a stark choice as they seek a balanced budget — do they raise taxes or cut spending?

Most interesting by far  is “communist” China. Only 20% of Chinese GDP is government spending.

That’s quite a wide range. But to spend more you have to tax more, and that will be unpalatable to many Americans.

America is really at a crossroads. Growth would be a panacea. But with the economy in a Japan-style depression, generating sustained growth will be difficult.