It depends how you define money.

The Federal Reserve controls the monetary base, and has vastly increased it as a result of quantitative easing: 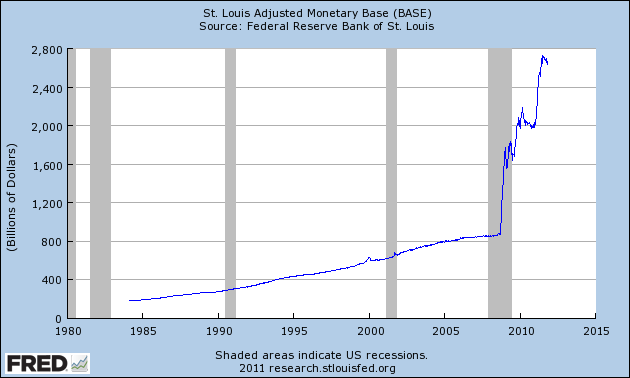 This means that while the monetary base has tripled, the money supply (M1) has not surged nearly as much:

But there is a much bigger factor here; M1 only deals with the obvious side of money supply — lending by financial institutions to businesses and consumers. There exists another banking system between banks and hedge funds where credit expansion takes places much less directly and obviously, via securitisation and rehypothecation — for example collateralised-debt-obligations (CDO), mortgage-backed-securities (MBS), etc. Here’s a recent chart of credit creation via these pseudo-monies: 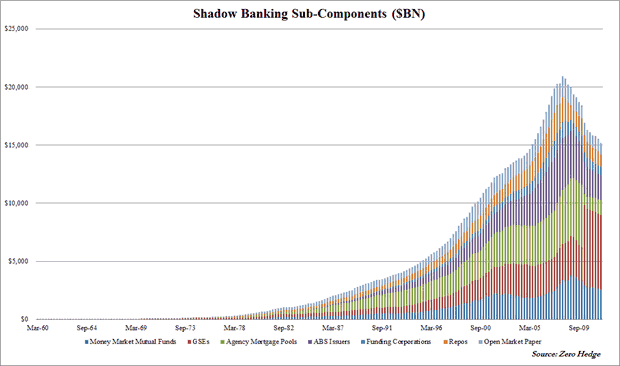 Simply, the Fed’s huge expansion of the monetary base has still failed to prevent the contraction of this strange and exotic part of the “money” supply stemming from the 2008 Lehman incident, and surely to be significantly worsened by the ongoing implosion in Europe. It has failed to prevent the sector from deflating and sucking down the wider economy.

In the years preceding 2008 the definition of “money” became extremely loose. When securities made up of sub-prime mortgages which are in arrears comes to pass for “money” — and came to stand on balance sheets as debt — it should have been painfully obvious that modern finance had mutated into an uncontrollable monster, and that no amount of quantitative easing could prevent prevent the inevitable credit contraction from blown-up asset prices tanking.

The shadow banking sector was never “too big to fail”; it was too monstrous to succeed.

14 thoughts on “Does the Fed Control the Money Supply?”