In a tremendous, and essential article for Project Syndicate, Nobel laureate Edmund Phelps, and regular reader Saifedean Ammous team up to obliterate the view that the West is at present a capitalist system, and that the problems of the West are problems of capitalism:

The term “capitalism” used to mean an economic system in which capital was privately owned and traded; owners of capital got to judge how best to use it, and could draw on the foresight and creative ideas of entrepreneurs and innovative thinkers. This system of individual freedom and individual responsibility gave little scope for government to influence economic decision-making: success meant profits; failure meant losses. Corporations could exist only as long as free individuals willingly purchased their goods – and would go out of business quickly otherwise.

Capitalism became a world-beater in the 1800’s, when it developed capabilities for endemic innovation. Societies that adopted the capitalist system gained unrivaled prosperity, enjoyed widespread job satisfaction, obtained productivity growth that was the marvel of the world and ended mass privation.

Now the capitalist system has been corrupted. The managerial state has assumed responsibility for looking after everything from the incomes of the middle class to the profitability of large corporations to industrial advancement. This system, however, is not capitalism, but rather an economic order that harks back to Bismarck in the late nineteenth century and Mussolini in the twentieth: corporatism.

In various ways, corporatism chokes off the dynamism that makes for engaging work, faster economic growth, and greater opportunity and inclusiveness. It maintains lethargic, wasteful, unproductive, and well-connected firms at the expense of dynamic newcomers and outsiders, and favors declared goals such as industrialization, economic development, and national greatness over individuals’ economic freedom and responsibility. Today, airlines, auto manufacturers, agricultural companies, media, investment banks, hedge funds, and much more has at some point been deemed too important to weather the free market on its own, receiving a helping hand from government in the name of the “public good.”

The costs of corporatism are visible all around us: dysfunctional corporations that survive despite their gross inability to serve their customers; sclerotic economies with slow output growth, a dearth of engaging work, scant opportunities for young people; governments bankrupted by their efforts to palliate these problems; and increasing concentration of wealth in the hands of those connected enough to be on the right side of the corporatist deal.

I too have spent a whole lot of energy and time lambasting our present system of corporatism.

The trouble is, the advocates of the status quo, and everything that means — government intervention in markets, central planning of the economy, the welfare-warfare state, bailouts, huge deficits, surveillance (for the purposes of taxation) and so forth — do not see themselves as corporatists, so much as they see themselves as go-gooders who want to “manage” the economy to a better place. They oppose the free market because they believe they know better than the market. They believe that our system today is a form of “constrained” capitalism which averts its worse excesses. Most significantly, they believe that the problems with the present system — income inequality and corporate power — are problems of capitalism, and that freer markets would make these problems worse.

As Ammous and Phelps suggest, they are blaming “capitalism” for the problems of corporatism.

There is strong evidence against doing so.

The growth in corporate power and income inequality seems to be largely an outgrowth of giving banks a monopoly over credit creation. In 1971, Richard Nixon severed the link between the dollar and gold, expanding the monopoly on credit creation to a carte blanche to print huge new quantities of dollars and give them to their friends.

Unsurprisingly, this led to a huge growth in the American and global money supplies: 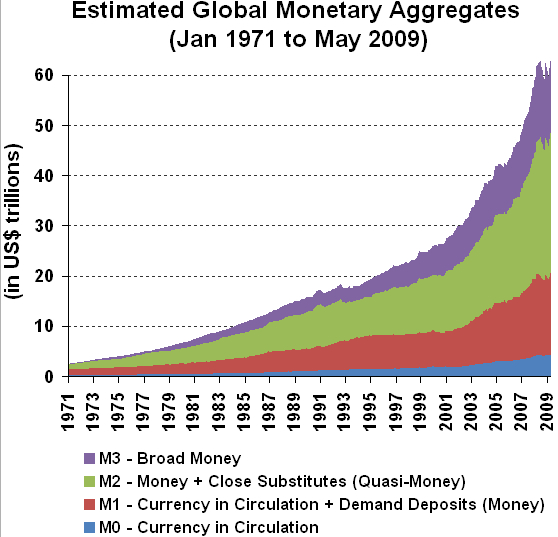 This new money was not exactly distributed evenly:

A lot of that money seems like it ended up in corporate profits: 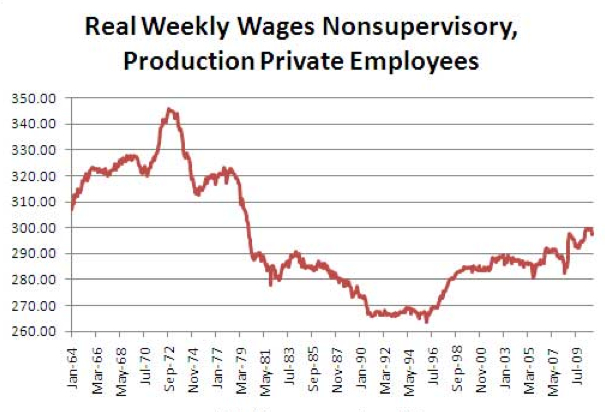 It is this stuff — the decrease in real wages, the growth in corporate profits, the growth in CEO pay, the growth in the wealth of the top 1% — that has inspired and informed movements like Occupy Wall Street. Sadly, such movements have largely avoided confronting the reality that this monstrous outgrowth of corporatism has developed in a heavily-regulated, socially-engineered, managerialist and interventionist economy, and not in a capitalist economy or in a free market, as so many occupiers claim.

It is completely inaccurate to paint these figures as problems of capitalism.

As I wrote earlier this week:

This psychological trend can be summed up as the idea that the first recourse for social and economic problems is more government action. Too much inequality? Regulate against it. Too little innovation? Legislate for it. Too little demand? Stimulate it. Too much bad government? Elect a better one, who will do more of the things we “love”, and less of those we “hate”.

The idea, in the simplest terms, is that changes to society should come from the great overhanging monolith, and not from the little individuals on the ground. No, we are just fish swimming in an ocean of dialectical chaos. We are just flecks of paint on the great canvas of humanity. No, let us not agitate or gravitate. Instead, we must “co-ordinate” and “unite” under the aegis of government; the blind painter.

The climax of this bizarre psychological trend was the election of Barack H. Obama. After all the misdeeds of Bush and Cheney, he would be the one to restore government to its “proper” role: “helping the people”, “creating a better America”, “investing in tomorrow”, etc, etc, etc, blah, blah, blah.

This is a licence for more central planning, more interventionism and more government largesse. There are two problems here:

After many decades of central planning and interventionism we are left with monstrous income inequality and corporate power.

Is it not fair to conclude that the two are intrinsically connected?

30 thoughts on “Corporatism and Income Inequality”