Mitt Romney is not the only global figure to unleash allegations of currency manipulation. In fact, most of the allegations are aimed at America and the West.

Brazilian President Dilma Rousseff slammed rich nations on Thursday for unleashing a “tsunami” of cheap money that threatened to “cannibalize” poorer countries such as her own, forcing them to act to protect struggling local industries.

Rousseff’s words amounted to some of the highest-profile criticism to date of efforts by the European Central Bank, the Bank of Japan and others to spur their economies through low interest rates and cheap loans. 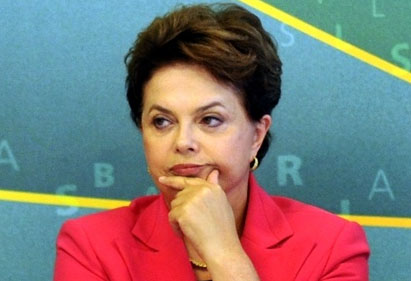 I just want to flag up Henry Kissinger’s words from his recent Foreign Affairs piece:

The current world order was built largely without Chinese participation, and hence China sometimes feels less bound than others by its rules. Where the order does not suit Chinese preferences, Beijing has set up alternative arrangements, such as in the separate currency channels being established with Brazil and Japan and other countries. If the pattern becomes routine and spreads into many spheres of activity, competing world orders could evolve. Absent common goals coupled with agreed rules of restraint, institutionalized rivalry is likely to escalate beyond the calculations and intentions of its advocates. In an era in which unprecedented offensive capabilities and intrusive technologies multiply, the penalties of such a course could be drastic and perhaps irrevocable.

Competing world orders could evolve? No; competing world orders are a reality, and it seems like Latin America — most obviously Argentina and Venezuela, but now also Brazil, and perhaps even Colombia and Mexico — are moving closer toward the emerging ASEAN bloc, and away from the West.

Ironically, the emerging currency war is as much as anything else a side-effect of Bernanke’s admitted preoccupation with fluffing and puffing up U.S. equities.

And it looks like he’s going to be getting a hand.

The Bank of Israel will begin today a pilot program to invest a portion of its foreign currency reserves in U.S. equities.

The investment, which in the initial phase will amount to 2 percent of the $77 billion reserves, or about $1.5 billion, will be made through UBS AG and BlackRock Inc., Bank of Israel spokesman Yossi Saadon said in a telephone interview today. At a later stage, the investment is expected to increase to 10 percent of the reserves.

In other words, while the Fed’s charter forbids it from buying US equities outright, it certainly can promise that it will bail out such bosom friends as the Bank of Israel, the Swiss National Bank, and soon everyone else, if and when their investment in Apple should sour.

Luckily, this means that the exponential phase in risk is approaching as everyone will now scramble to frontrun central bank purchases no longer in bonds, but in stocks outright, leading to epic surges in everything risk related, then collapse and force the Fed to print tens of trillions to bail everyone out all over again, rinse repeat. We say luckily, because it means that the long overdue systemic reset is finally approaching.

Developing nations have a legitimate concern: Western central banks will throw liquidity around to no end to save the status quo. And that means that developing nations will themselves feel they have to compete in order to remain competitive. It’s messy.