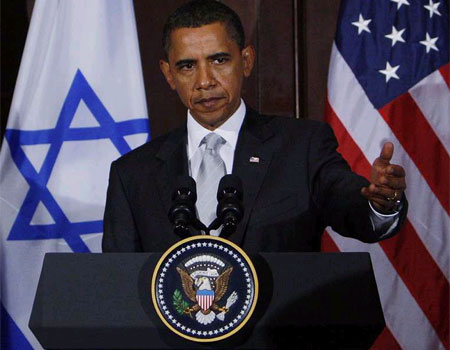 President Barack Obama said Sunday the United States will not hesitate to attack Iran with military force to prevent it from acquiring a nuclear weapon.

Glenn Greenwald sums up the hypocrisy of it all:

Is that not the classic case of a “preventive” war (as opposed to a “preemptive” war), once unanimously scorned by progressives as “radical” and immoral when the Bush administration and its leading supporters formally adopted it as official national security doctrine in 2002?

I am relatively adamant that Obama is bluffing (mainly because he explicitly says that he isn’t). As I wrote last month:

Both China and Pakistan have given assurances of some kind of support for Iran, if attacked. Why would Israel choose direct and open warfare against Iran and risk provoking a wider conflict when they can instead engage in a much less risky covert war of subterfuge, sabotage and assassination?

Furthermore, why would the US Secretary of Defence go on the record to divulge Israeli military plans? Frankly, it sounds like Panetta’s [and Obama’s] vocalisations are a decoy to keep Iran edgy, and try to incite Iranians on the ground to rise up in revolt and overthrow the regime, as a path to avoiding war.

While I have already given a pretty comprehensive breakdown of the Western motivations for such a war, the simple truth emerging is that the risks of wider trouble and blowback are too big, and outweigh all the prospective benefits. American and Israeli policymakers may have finally realised that the West just has too much to lose from antagonising China and Russia even more.

In any case, there is a reasonable chance that Iran already has a nuclear weapon.

According to one of Europe’s most famous newspapers, which in turn references a report in Welt am Sontag, North Korea has conducted at least two nuclear warhead tests in 2010, of which was on behalf of Iran.

In 2010? But I thought that Iran’s government — who are portrayed in the Western press as a psychotic band of terroristic religious fanatics — were going to “wipe Israel off the map” as soon as they had sufficient material?

That widely-espoused notion is rubbish. There is almost no chance of any nuclear strike — Iranian, or from Hezbollah — on Israel. Given that Israel has devastating second strike capabilities, any such offensive would wipe Iran — not Israel — off the map, and Iran knows it.