It is often said that prostitution is the oldest profession. This is not true, and I know this with a very high degree of certainty. For a prostitute to subsist, there must be  a medium of exchange, and for a medium of exchange to exist — even in terms of barter — there must be a surplus of production (i.e. a person is producing more than they can consume). Thus, there must be pre-existing productivity, for example food that has been hunted, or gathered or grown, tools that have been created, etc.

The truth is that prostitution (or perhaps soldiery) is probably the oldest service profession.

At present, the Western economies are dominated by services.

From the World Bank: 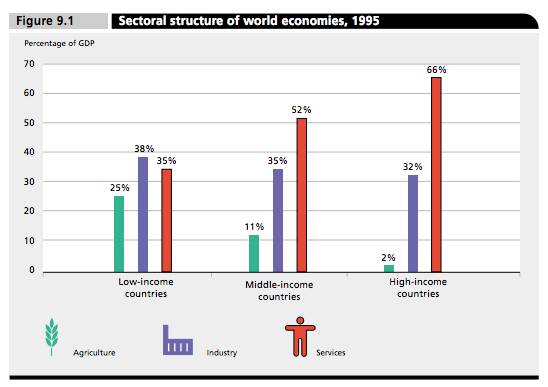 Joe Sitglitz’s article in Vanity Fair late last year argued that we need to move even further into a service-led economy:

What we need to do instead is embark on a massive investment program—as we did, virtually by accident, 80 years ago—that will increase our productivity for years to come, and will also increase employment now. This public investment, and the resultant restoration in G.D.P., increases the returns to private investment. Public investments could be directed at improving the quality of life and real productivity—unlike the private-sector investments in financial innovations, which turned out to be more akin to financial weapons of mass destruction.

The private sector by itself won’t, and can’t, undertake structural transformation of the magnitude needed—even if the Fed were to keep interest rates at zero for years to come. The only way it will happen is through a government stimulus designed not to preserve the old economy but to focus instead on creating a new one. We have to transition out of manufacturing and into services that people want—into productive activities that increase living standards, not those that increase risk and inequality.

Now I’m not accusing Stiglitz of anything other than a misplaced zeal for fixing the American economy. His suggestion is merely emblematic of a wider misconception.

Service jobs come into existence as there are bigger surpluses of production. In an isolated national economy, the services sector will only grow if the productive sector grows in proportion. But in a global economy, with flows of trade and goods, illusions are possible.

The continued prosperity of the West is dependent on the continued flow of goods and services into the West.

This is an intentionally zany example (but certainly no less zany than Krugman’s babysitting co-op) of how moving to a “service-based” (pun-intended, you’ll see) economy can prove detrimental:

Imagine the centrally-planned society of War-is-Peace-Land, occupying one half of a large island, and led by an absolute King. The kingdom is very successful in warfare, and maintains a great advantage over its sole neighbour. 50% of its working subjects are conscripted into the military, in various roles — soldiery, tactics, smithing, horsemanship, etc. Of the other half of the population 30% work in collective agriculture, 10% work in light industry (e.g. making candles) and 10% are personal servants to the King (or in the case of females part of his large harem). Now, the King does not like the fact that his harem is not as large as it could be; he does not like that there are women and girls toiling the fields when they could be in his harem. Nor does he like that there are men toiling in the fields when they could instead be conscripted into the military.

Fortunately in the neighbouring kingdom of Productivity Land, they have huge surpluses of agriculture and productivity, as only 30% of their population is conscripted into the military, while 40% work in agriculture, and 20% in light industry. As they make such huge surpluses, they are willing to make up for any shortfall in War-is-Peace-Land. As a result of this, more and more workers in War-is-Peace-Land can be moved from agriculture to serving the King, either as a manservant (carrying his Royal chair, beating up anyone who insults him, tending to his elaborate gardens) or as a member of his harem. In return for this, the King sends promissory notes — which are often promptly lent back —  from Productivity Land to pay for their products. Productivity Land uses this money to acquire natural resources from other islands.

Eventually, the King decides that his pleasure gardens need to be greatly expanded, and so he moves the entire non-military workforce out of agriculture, and into manufacture terra cotta and bronze statues, to decorate his pleasure gardens. Of course, War-is-Peace Land has built up a humungous debt over the years, and Productivity Land feels short-changed in sending its productive output across to the other half of the island in exchange for increasingly-devalued pieces of fiat paper that buy increasingly less and less resources. But the King of Productivity Land is very smart. He recognises that winning a military confrontation with War-is-Peace Land will still be difficult, so he agrees to continue this arrangement so as to make War-is-Peace Land even more deeply dependent upon the produce of Productivity Land.

One day, the King of War-is-Peace Land was out frolicking gaily in his pleasure gardens, smoking his pipe and contemplating a lazy afternoon molesting his harem. Alas, no. A messenger from Productivity Land arrived at the Palace to inform him that Productivity Land was sick of his devalued fiat currency, and so would no longer send agricultural products or other produce. That was it — War-is-Peace Land had no intent to pay back their debt, so they were out in the cold.

“Nonsense!” cried the King, and promptly had the messenger arrested, tortured and killed. He rallied his generals, and declared war against Productivity Land. Alas, they did not get very far. It took three days for the army to be rallied together into a fighting force, and by that time War-is-Peace Land was running low on food and fuel. Armies — no matter how well-equipped — cannot march on an empty stomach. The tired and weary soldiers of War-is-Peace Land were more numerous and better equipped, but their hunger and subsequent tiredness got the better of them and they were massacred and beaten back. The King tried to escape, but was captured by Productivity Land’s forces and promptly executed.

Readers can read whatever they like into the above story; it is purely fictitious, and of course massively simplified. But I think it captures the essence of the problem of  outsourcing your productivity to foreign lands who might not always be as friendly as they appear to be today.

The bottom line here is that any proposals regarding transitioning to an economy even more dependent on services assumes that goods and productivity will keep flowing into the West, even though there is no guarantee of such a thing.

Governments in the West would do better to worry about the West’s (lack of) energy and resource independence.