Should the rise of China have us nervous about a neodymium gap?

It’s a question President Barack Obama is taking seriously, as he showed Tuesday in asking the World Trade Organization to look into China’s manipulation of the global market in so-called rare-earth elements. We wish the U.S. Defense Department would show an equal amount of concern.

Neodymium is one of 17 rare-earth metals that have become vital to industrial production and national security in our high-tech age.

One thing neodymium isn’t is rare — it is as commonplace in the earth’s crust as prosaic metals like copper, and scattered around the globe. Much the same can be said of praseodymium (used in Hollywood’s arc lights), samarium (guided missiles) and lanthanum (night-vision goggles). Yet, despite this abundance, China produces more than 90 percent of the global supply of rare earths.

The trigger points for wars often seem silly and inconsequential; and readers only need to refer to yesterday’s post to consider just how consequential the outcome of this nascent trade war might be. And the reality here is that America has ample supplies of rare earths: 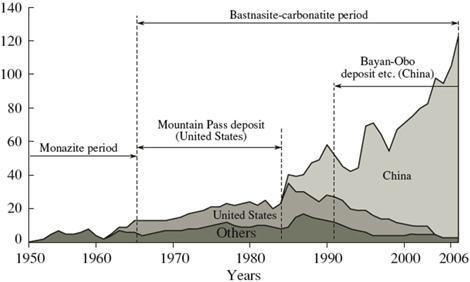 That’s right: the United States was once Earth’s greatest producer of rare earth metals. But China managed to do it more cheaply, and so American interests decided they would go with the cheaper option. And so America’s national security interest was compromised as China can now set whatever quotas and prices they want. America’s huge rare earth resources remain undeveloped.

The US has 13 million tonnes of rare earth elements but it would take years to extract them, suggests the first detailed report on the country’s supply.

“Rare earth” is an alternative name for the lanthanides – elements 57 to 71 – plus yttrium and scandium. The elements are integral to modern life, and are used in everything from disc drives, hybrid cars and sunglasses to lasers and aircraft used by the military.

China controls 97 per cent of the world’s supply and has been tightening its export quotas, sparking concerns that the rare earths could live up to their name.

What the big media commentators are missing is that this problem is a microcosm of a much, much bigger problem for America down the road. Namely, that this is far from the only industry — from resources, to components, to finished goods — where China produces, and America consumes, and China can cut America off any time she likes.

“Oh, but they’ll never cut us off!” cries the deluded American wishful-thinker. “They need us to consume their produce!”

Sadly, China has 1300 million people in its own population who would be quite willing to do a little consumption to keep the Chinese economy ticking over. Consumption is easy — anyone can consume — especially an economy with a very high savings rate and a huge hoard of $ and €, like China.

This strain of American thought reminds me very much of the pre-sacking Roman elites who foolishly clung to the belief that the barbarians could never sack Rome, because Rome was Rome, and the barbarians were snivelling Dionysians lacking in culture and sensibility.

No, the barbarians can sack Rome. And they will, so long as America keeps trying so damn hard to stay resource- and energy-dependent, and to continue to accrue debt to foot the bill for her role as global policeman.