This is a demographic disaster.

Unemployment among Europe‘s young people has soared by 50% since the financial crisis of 2008. It is rising faster than overall jobless rates, and almost half of young people in work across the EU do not have permanent jobs, according to the European commission.

There are 5.5 million 15- to 24-year-olds without a job in the EU, a rate of 22.4%, up from 15% in early 2008. But the overall figures mask huge national and regional disparities. While half of young people in Spain and Greece are out of work, in Germany, Austria and the Netherlands it is only one in 10. In a further six EU countries, youth unemployment is around 30%. Of those in work, 44% are on temporary contracts.

The same phenomenon exists in the United States:

And why is this such a staggering  problem?

Firstly, the psychological impact: a whole lot of young people have never become integrated with the workforce. Many will become angry and disillusioned, and more likely to riot and rob than they are to seek productive employment. There is a significant amount of evidence for this:

Thornberry and Christensen (1984) find evidence that a cycle develops whereby involvement in crime reduces subsequent employment prospects which then raises the likelihood of participating in crime. Fougere (2006) find that increases in youth unemployment causes increases in burglaries, thefts and drug offences. Hansen and Machin (2002) find a statistically significant negative relationship between the number of offences reported by the police over a two year period for property and vehicle crime and the proportion of workers paid beneath the minimum before its introduction. Hence, there are more crime reductions in areas that initially, had more low-wage workers. Carmichael and Ward (2001) found in Great Britain that youth unemployment and adult unemployment are both significantly and positively related to burglary, theft, fraud and forgery and total crime rates.

Additionally unemployment is correlated with higher rates of suicide and mental illnesses like depression. And of course, the longer the unemployment, the rustier workers become, and the more skills they lose. Frighteningly, the numbers of long-term unemployed are rising: 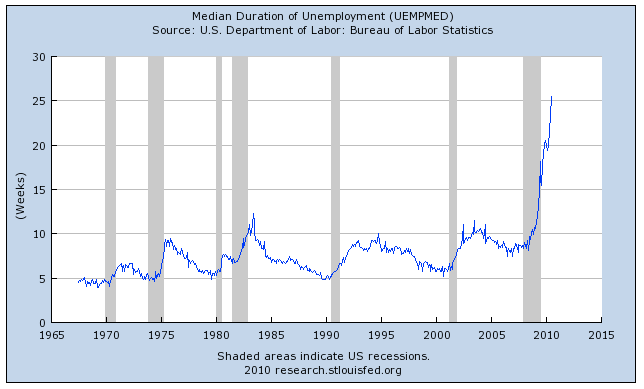 Second, the economic impact: people sitting at home doing nothing don’t contribute productivity to society. In a society faced with falling or stagnant productivity, that is frustrating; there are lots of people sitting there who could be contributing to a real organic recovery, but they are not, because nobody is hiring, and (perhaps more importantly) barriers to entry and the welfare trap are crowding out the young, and preventing the unemployed from becoming self-employed. It also means higher welfare costs:

That leads to higher deficits, and greater government debt.

So it is not just a demographic disaster; it is also a fiscal one.

35 thoughts on “The Disaster of Youth Unemployment”