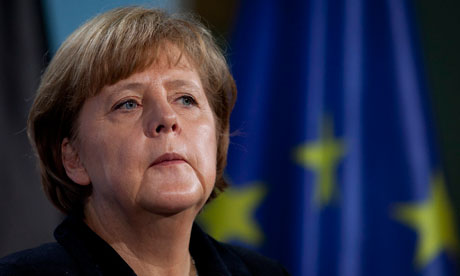 Last December I took the time to explain capitalism for Angela Merkel:

Capitalism means both successes and failures. It is a fundamentally experimental system, with a continuous feedback mechanism — the market, and ultimately profit and loss. Ideas that work are rewarded with financial success, and ideas that don’t are punished with failure. With capitalism, systems, ideas and firms that fail to produce what the market wants fail. They go bankrupt. Their assets, and their debt is liquidated.

When that mechanism is suspended by a government or central bank that thinks it knows best — and that a system that is too interconnected to fail is worth saving at any cost — the result is almost always stagnation. This is for a number of reasons — most obviously that bailouts sustain crippling debt levels, and are paid for through contractionary austerity. But it is larger than just that.

In nature, ideas and schemes that work are rewarded — and ideas and schemes that don’t work are punished. Our ancestors who correctly judged the climate, soil and rainfall and planted crops that flourished were rewarded with a bumper harvest. Those who planted the wrong crops did not get a bailout — they got a lean harvest, and were forced to either learn from their mistakes, or perish.

These bailouts and interventions have tried to turn nature on its head — bailed out bankers and institutions have not been forced by failure to learn from their mistakes, because governments and regulators protected them from failure.

Obviously she did not read my advice.

Angela Merkel is not happy that financial markets have not made any contribution to resolving the financial crisis.

What financial markets? The markets have just become another manipulated manifestation of central planning. The more dollars, euros and yen that central banks pump into markets the less traders will be trading fundamentals  — i.e. basing their trading on the inherent value of securities, and allowing the needs and wants of society to determine economic output — and the more they will be trading the prospects for more central bank and government intervention, more QE, more hopium.

Central planning always and inevitably has unsolicited side-effects (in this case, that markets would be corrupted and junkiefied), and usually side-effects which are not necessarily visible or detectable to the person doing the planning no matter how sophisticated their pseudo-scientific simulations appear to be. Central planners are always making decisions with incomplete information, and the missing information very often has a large and appreciable effect on outcomes. In a small and decentralised system, this is not a problem; decision-makers can usually locally adjust their behaviour to a new trajectory as they get new information. But for central planners, operating from the centre of a system, policy is always centralised and generalised, slow to adapt to local information, slow to adjust to local trends and patterns, broad and sweeping rather than subtle and local.

Very simply: the only way that financial markets could ever have solved the financial crisis is if government had left them alone enough for them to adapt to the new post-bubble reality. At the very most, this meant providing a safety net for the poor and the jobless while the market worked out its problems. Instead, our leaders chose to preserve and thus crystallise possibly the most-deranged and malinvestment-fuelled bubble economy in human history, full of greedy and parasitic companies of no real value to society, and which in a market economy would have gone bust long ago.

The great delusion of Western governments in this era has been that everything appears to them to be a problem for them to fix. If they identify a problem, they will find a way (usually with our tax money) to address it. They almost never realise or even consider that sometimes the problems that they identify are best addressed by being left alone (with at most the provision of a safety net for the poor and vulnerable). If you’re holding a hammer, every problem will look like a nail. And government keeps bashing society with the hammer of centralisation and central control. And society is not a nail.

Lao Tzu understood this in stating:

The wisest course is to keep the government simple and inactive, for then the world stabilises itself.