There is a widely-held notion on the political left that the key economic problem that our civilisation faces is income inequality.

America emerged from the Great Depression and the Second World War with a much more equal distribution of income than it had in the 1920s; our society became middle-class in a way it hadn’t been before. This new, more equal society persisted for 30 years. But then we began pulling apart, with huge income gains for those with already high incomes. As the Congressional Budget Office has documented, the 1 percent — the group implicitly singled out in the slogan “We are the 99 percent” — saw its real income nearly quadruple between 1979 and 2007, dwarfing the very modest gains of ordinary Americans. Other evidence shows that within the 1 percent, the richest 0.1 percent and the richest 0.01 percent saw even larger gains.

By 2007, America was about as unequal as it had been on the eve of the Great Depression — and sure enough, just after hitting this milestone, we plunged into the worst slump since the Depression. This probably wasn’t a coincidence, although economists are still working on trying to understand the linkages between inequality and vulnerability to economic crisis. 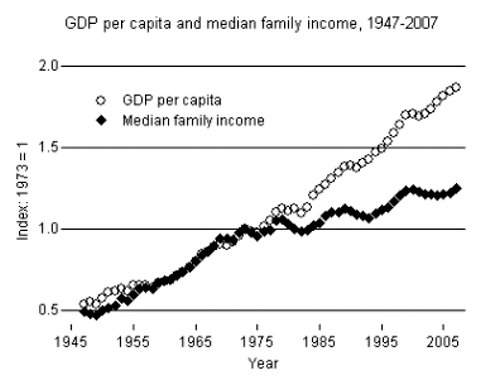 However it is just as important, perhaps more important to identify the causes of the income inequality.

I have my own pet theory:

The growth in income inequality seems to be largely an outgrowth of giving banks a monopoly over credit creation. In 1971, Richard Nixon severed the link between the dollar and gold, expanding the monopoly on credit creation to a carte blanche to print huge new quantities of dollars and give them to their friends.

Unsurprisingly, this led to a huge growth in the American and global money supplies. This new money was not exactly distributed evenly. A shrinking share has gone to wage labour.

However the dominant explanation on the left is that this is down to the tax structure. I can’t falsify this theory, because the data supports it:

But why has the government chosen to tax corporations less, and payrolls more?

Who owns the government? Political donors — they finance the political system. Before one vote is cast candidates tailor their platforms to meet the criteria of donors. Who are political donors? Well, they are people with spare capital to expend in the name of getting politicians elected.

Here’s a side-by-side comparison of the presumptive 2012 Presidential nominees:

(Even bigger money flows through the Super PACs. A full breakdown of Super PAC donors can be found here; the same donor profile emerges).

So who are the biggest donors? Banks & large corporations: the very people who have benefited most from the post-1971 tidal wave of fiat credit creation.

So not only has an exorbitantly high proportion of new credit gone into corporate and financial profits, but the beneficiaries have used these fruits to buy out the political system, thus ensuring that they keep an even higher proportion of their incomes, while making up for this slump with greater borrowing, and greater taxation of payrolls.

The political left — epitomised, I suppose, by the Occupy movement — often call for “taking the money out of politics”. By this, they seem to mean holding elections that are not funded by private money, where all candidates are given the same resources. The reality of this, of course, is that such a measure would require a change in the Constitution, as privately-funded political advertising is protected speech under the First Amendment.

But let’s assume — just for the sake of argument — that a law “taking the money out of politics” could be enacted by simple majorities in the House, the Senate, and a Presidential signature (after all, President Obama’s legislative program has not maintained much respect for the original intent of the U.S. Constitution). Even under those implausible circumstances, why would Congress pass such a law when the entire political system is dominated by financial donors who want their money to very much be in politics? After all, it is not just for the sake of tax avoidance — government largesse produces lucrative contracts for contractors. The more money the government has to redistribute, the more incentive there is to spend money to get your people into office redistributing it, and government has more money to distribute — both in absolute terms, and as a percentage of GDP — than at any time since World War II.

The other (and simpler) proposed solution from the left is raising taxes on the rich, so that they pay a “fair share”. There are two problems with this. Firstly, that raising taxes during an economic depression is contractionary, and will (like the misguided and destructive European austerity programs, which of course include tax hikes) depress economic conditions further. And even if this was a good proposal (it isn’t), the political class will fiercely resist such proposals. Today, the Democratic-controlled Senate voted down the so-called Buffett Rule, that would have imposed a 30% floor on taxation for incomes over $250,000. (Buffett — as a top recipient of Federal Reserve bailout cash — would have no problem paying such a rate, unlike those far poorer than him who never took a penny of bailout money. Buffett would do well to spend less time in the bath thinking about Becky Quick, and more time using his capital to create jobs, to end this depression.)

Income inequality is a symptom of a grave problem: corporatism.

From Professors Ammous and Phelps:

Now the capitalist system has been corrupted. The managerial state has assumed responsibility for looking after everything from the incomes of the middle class to the profitability of large corporations to industrial advancement. This system, however, is not capitalism, but rather an economic order that harks back to Bismarck in the late nineteenth century and Mussolini in the twentieth: corporatism.

In various ways, corporatism chokes off the dynamism that makes for engaging work, faster economic growth, and greater opportunity and inclusiveness. It maintains lethargic, wasteful, unproductive, and well-connected firms at the expense of dynamic newcomers and outsiders, and favors declared goals such as industrialization, economic development, and national greatness over individuals’ economic freedom and responsibility. Today, airlines, auto manufacturers, agricultural companies, media, investment banks, hedge funds, and much more has at some point been deemed too important to weather the free market on its own, receiving a helping hand from government in the name of the “public good.”

The costs of corporatism are visible all around us: dysfunctional corporations that survive despite their gross inability to serve their customers; sclerotic economies with slow output growth, a dearth of engaging work, scant opportunities for young people; governments bankrupted by their efforts to palliate these problems; and increasing concentration of wealth in the hands of those connected enough to be on the right side of the corporatist deal.

A realistic program to  “take the money out of politics” — in other words, to return America’s form of government to its original constitutional intent, like the program advocated by Ron Paul — would do a lot to decapitate corporate power and the military-industrial-financial-corporate complex, who are mostly dependent upon government largesse, favourable regulation, bailouts, and moral-hazard-creating fictions like limited liability — for their very existence. But that won’t fly with either the political kingmakers, or the welfare-loving hordes of  voters (and often for good reason — many of us have paid taxes toward welfare all our lives, and don’t want to lose out of something we have paid for).

The real conclusion of this is that the status quo is not sustainable. Corporatism and oligopoly is almost never sustainable, because of the dire social consequences. Today, almost 20% of young people are unemployed, wasting on the scrapheap. The median net worth of the young is lower than it was 30 years ago. The number of long-term unemployed has spiked to an all-time-high. Prison populations are at all time highs — and the highest in the world, both proportionally, and in absolute terms. America’s former industrial belt rusts; American manufacturing (what’s left of it) has often been reduced to re-assembling foreign components. America is heavily dependent on foreign oil. The American imperial machine is suffering from a lack of manpower. America’s strengths are melting away in a firestorm of misguided central planning, imperial waste, and corporate corruption. America’s social culture is fiery and combustible and individualistic. Young people denied opportunity by a broken system will do something about it. Occupy Wall Street and the 2012 Ron Paul Presidential campaigns were the first manifestations of the jilted generation dabbling in politics.

The political left misunderstands the causes of income inequality — confused by the belief that government can somehow challenge the corporate and financial power it created in the first place — and thus proposes politically unrealistic (non-) solutions, particularly campaign finance reform, and raising taxes on the rich and corporations. Yes, the left are well-intentioned. Yes, they identify many of the right problems.  But how can government effectively regulate or challenge the power of the financial sector, megabanks and large corporations, when government is almost invariably composed of the favourite sons of those organisations? How can anyone seriously expect a beneficiary of the oligopolies — whether it’s Obama, McCain, Romney, Bush, Gore, Kerry, or any of the establishment Washingtonian crowd — to not favour their donors, and their personal and familial interests? How can we not expect them to favour the system that they emerged through, and which favoured them?

In reality, the system of corporatism that created the income inequality will inevitably degenerate of its own accord. The only question is when…

102 thoughts on “Why the Left Misunderstands Income Inequality”