The entire economics world is abuzz about the intriguing smackdown between Paul Krugman and Ron Paul on Bloomberg. The Guardian summarises:

I find it quite disappointing that there has not been more discussion in the media of the idea — something Ron Paul alluded to — that most of the problems we face today are extensions of the market’s failure to liquidate in 2008. Bailouts and interventionism has left the system (and many of the companies within it) a zombified wreck. Why are we talking about residual debt overhang? Most of it would have been razed in 2008 had the market been allowed to liquidate. Worse, when you bail out economic failures — and as far as I’m concerned, everyone who would have been wiped out by the shadow banking collapse is an economic failure — you obliterate the market mechanism. Should it really be any surprise that money isn’t flowing to where it’s needed?

A whole host of previously illiquid zombie banks, corporations and shadow banks are holding onto trillions of dollars as a liquidity buffer. So instead of being used to finance useful and productive endeavours, the money is just sitting there. This is reflected in the levels of excess reserves banks are holding (presently at an all-time high), as well as the velocity of money, which is at a postwar low: 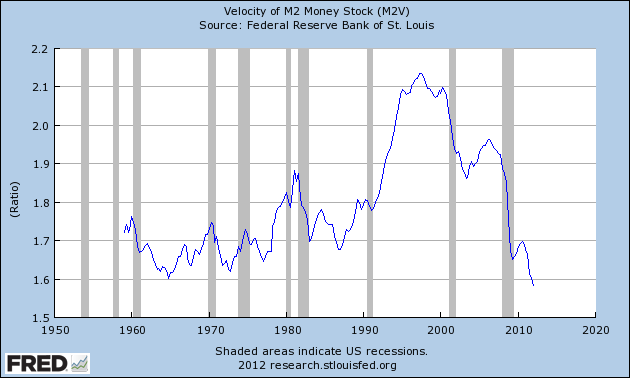 Krugman’s view that introducing more money into the economy and scaring hoarders into spending more is not guaranteed to achieve any boost in productivity.

As I wrote last month:

The fundamental problem at the heart of this is that the Fed is trying to encourage risk taking by making it difficult to allow small-scale market participants from amassing the capital necessary to take risk. That’s why we’re seeing domestic equity outflows. And so the only people with the apparatus to invest and create jobs are large institutions, banks and corporations, which they are patently not doing.

Would more easing convince them to do that? Probably not. If you’re a multinational corporation with access to foreign markets where input costs are significantly cheaper, why would you invest in the expensive, over-regulated American market other than to offload the products you’ve manufactured abroad?

So will (even deeper) negative real rates cause money to start flowing? Probably — but probably mostly abroad — so probably without the benefits of domestic investment and job creation.

Nor is it guaranteed to achieve any great boost in debt relief.

Inflation only reduces debt overhang in a significant way for households who are fortunate enough to see their nominal wages rise along with the general rise in prices. In today’s economy, workers are frequently not so fortunate.

Again, I have to bring this back to why we are even talking about debt relief. The 2008 crash was a natural form of debt-relief; the 2008 bailouts, and ongoing QE and Twist programs (which contrary to Professor Krugman’s apologetics really do transfer wealth from the middle classes to Wall Street) crystallised the debt burden born from a bubble created by Greenspan’s easy money policies. There would be no need for a debt jubilee (either an absolute one, or a Krugmanite (hyper)inflationary one) if we had simply let the market do its work. A legitimate function for government would have at most been to bail out account holders, provide a welfare net for poor people (never poor corporations) and let bankruptcy courts and markets do the rest. Instead, the central planners in Washington decided they knew best.

The key moment in the debate? 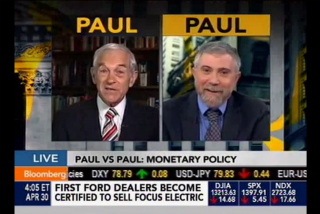 I am not a defender of the economic policies of the emperor Diocletian. So let’s just make that clear.

Ron Paul is dead right. Krugman and the bailout-happy regime for which he stands are absolutely following in the spirit of Diocletian.

Rome had its socialist interlude under Diocletian. Faced with increasing poverty and restlessness among the masses, and with the imminent danger of barbarian invasion, he issued in A.D. 301 an edictum de pretiis, which denounced monopolists for keeping goods from the market to raise prices, and set maximum prices and wages for all important articles and services. Extensive public works were undertaken to put the unemployed to work, and food was distributed gratis, or at reduced prices, to the poor. The government – which already owned most mines, quarries, and salt deposits – brought nearly all major industries and guilds under detailed control.

Diocletian explained that the barbarians were at the gate, and that individual liberty had to be shelved until collective liberty could be made secure. The socialism of Diocletian was a war economy, made possible by fear of foreign attack. Other factors equal, internal liberty varies inversely with external danger.

While Krugman does not by any means endorse the level of centralism that Diocletian introduced, his defence of bailouts, his insistence on the planning of interest rates and inflation, and (most frighteningly) his insistence that war can be an economic stimulus (in reality, war is a capital destroyer) all put him firmly in Diocletian’s economic planning camp.

So how did Diocletian’s economic program work out?

Diocletian’s mass minting of coins of low metallic value continued to increase inflation, and the maximum prices in the Edict were apparently too low.

Merchants either stopped producing goods, sold their goods illegally, or used barter. The Edict tended to disrupt trade and commerce, especially among merchants. It is safe to assume that a gray market economy evolved out of the edict at least between merchants.

And certainly Rome lived for almost 150 years after Diocletian. However the long term effects of Diocletian’s economic program were dire:

Thousands of Romans, to escape the tax gatherer, fled over the frontiers to seek refuge among the barbarians. Seeking to check this elusive mobility and to facilitate regulation and taxation, the government issued decrees binding the peasant to his field and the worker to his shop until all their debts and taxes had been paid. In this and other ways medieval serfdom began.

Have the 2008 bailouts done the same thing, cementing a new feudal aristocracy of bankers, financiers and too-big-to-fail zombies, alongside a serf class that exists to fund the excesses of the financial and corporate elite?

Only time will tell.