What are the classic signs of an asset bubble? People piling into an asset class to such an extent that it becomes unprofitable to do so.

Treasury bonds are so overbought that they are now producing negative real yields (yield minus inflation): 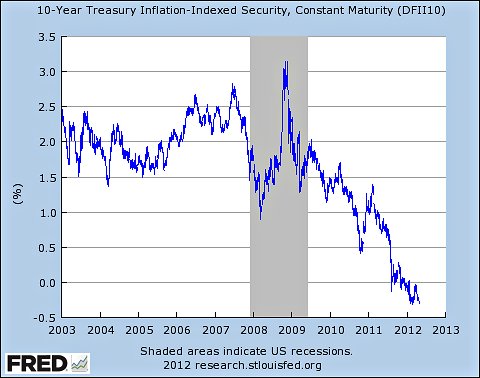 That’s right, after taking into account inflation, many investors in treasuries are standing over a drain and pouring their money down it.

And so America’s creditors are now getting slapped quite heavily in the mouth by the Fed’s easy money inflationist policies.

I propose (much, I am sure, to the consternation of the monetarist-Keynesian “print money and watch your problems evaporate” establishment) that this is a very, very, very dangerous position. And I propose that those economists who are calling for even greater inflation are playing with dynamite.

See, while the establishment seems to largely believe that the negative return on treasuries will juice up the American economy — in other words that “hoarders” will stop hoarding and start spending — I believe that negative side-effects from these policies may cause severe harm.

There is the danger of a bursting treasury bubble. What would happen if America’s creditors decide they want to liquidate their positions? After all, they’re getting slapped in the mouth , and the Fed is promising to continue with the zero interest rate policy until at least 2014.

And we know for sure that even before real rates on treasuries turned negative that China were selling:

The Fed has been picking up the slack, and will have to continue to do so for the forseeable future (the private domestic and international markets have no reason to increase purchases assets of with a negative real rate of return).

This means that to keep the Treasury’s interest payments low, the Fed will have to start printing more money, which brings us to the second danger: the danger of runaway inflation.

But inflation has stayed (relatively) low for one reason: the money he printed isn’t circulating. The primary dealer banks are holding the money as excess reserves. Can this last?

I doubt it. As I noted last month:

So, does the accumulation of excess reserves lead to inflation?

Only so much as the frequentation of brothels leads to chlamydia and syphilis.

Excess reserves are only non-inflationary so long as the banks — the people holding the reserves — play along with the Fed-Treasury game of monetising debt and trying to hide the inflation . The banks don’t have to lend these reserves out, just as having sex with hookers doesn’t have to lead to an infection.

But eventually — so long as you do it enough — the condom will break.

This trend of amassing excess reserves (done, lest we forget, as a stability measure to protect primary dealers against another shadow banking collapse) is closer to going to sleep upon a bed of dynamite.

But inflation is only the most obvious risk.

The greatest danger is illustrated here: 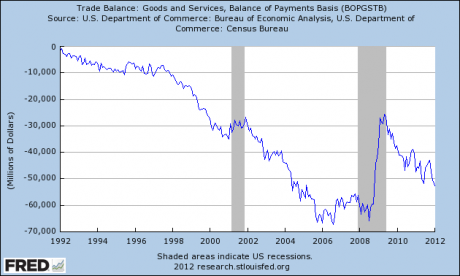 America — for most of last century exporter and creditor to the world now runs the biggest trade deficits the world has ever seen.

Let’s not forget that these creditors that U.S. monetary policy is now slapping in the face produce most of our consumption, much of our military hardware, and most of our oil.

Of course, many neocons seem to believe that this position is sustainable; that America can slap her creditors in the face all she likes because she has thermonuclear weapons and can tell the rest of the world to go and bite the big one.

As VeteransToday noted in December:

China is the country of origin for many, many of the semiconductors used by the US Military. It was most likely that China provided the hardware with the secret backdoor that allowed the Iranians to seize control of the Stealth drone while the drone was on a secret CIA mission over Iran.

Working together, they captured a state of the art US Military stealth aircraft.

What this means to all US Military personnel serving anywhere in the world? It means that control of any electronics system in any type of platform, can be seized and used against the military that launched it.

I don’t doubt America still has great technological and infrastructural advantages over her Eurasian creditor rivals. But do we really want to test the limits of our power? Do we really want to try and provoke a trade war with China and the other Eurasian nations (who of course are testing the petrodollar reserve to its limits by creating their own reserve currency agreements) by obliterating the value of their dollar-denominated assets?

So now we know, beyond a shadow of doubt that U.S. Treasuries are in a historic bubble.

We know that to some degree the Federal Reserve and Ben Bernanke are guilty of stoking up this program by buying U.S. Treasuries (artificial demand) and thus constricting supply. We know that this is screwing America’s creditors who happen to produce a lot of America’s consumption, components, military hardware, energy and resources. We know that these nations are using increasingly violent rhetoric regarding their relationship with the United States (Putin for instance described America as a parasite), and are activating agreements to ditch the dollar as the reserve currency.

I’d call that playing dice with the devil.

63 thoughts on “The Treasury Bubble in One Graph”