So we know that the pro-bailout parties in Greece have failed to form a coalition, and that this will either mean an anti-bailout, anti-austerity government, or new elections, and that this will probably mean that the Greek default is about to become extremely messy (because let’s face it the chances of the Greek people electing a pro-austerity, pro-bailout government is about as likely as Hillary Clinton quitting her job at the State Department and seeking a job shaking her booty at Spearmint Rhino).

It was said that the E.U.’s existence was justified in the name of preventing the return of nationalism and fascism to European politics.

Well, as a result of the austerity terms imposed upon Greece by their European cousins in Brussels and Frankfurt, Greeks just put a fully-blown fascist party into Parliament.

The ultra nationalist far right party Golden Dawn supporters celebrated on Sunday after exit polls showed them winning between 5 to 7 per cent of the vote, enough for them to gain representation in parliament for the first time in Greek history. Golden Dawn Leader, Nikolaos Michaloliakos shouted “The Europe of the nations returns, Greece is only the beginning” as he walked towards party headquaters and pledged to deal with illegal immigrants first.

For doubters of their intellectual lineage, here’s their logo: 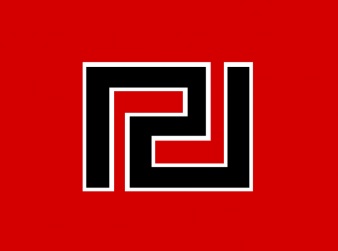 I (among many others) have argued since at least last year that increased nationalism would be a result of the status quo, which is of course deeply ironic.

Winston Churchill famously noted that a new European unity was the path to the people of Europe forgetting the “rivers of blood that have flowed for thousands of years”.

Well it looks like some of the memories of those rivers of blood are about to be unleashed. How was it possible that a regime set up ostensibly to create more and deeper European unity seems to have sown the seeds for division and nationalism? Quite easily, really.

By designing a system that allowed for governments to spend freely in a fiat currency they could not print more of, Brussels effectively set up member states for fiscal crises. But the fiscal crisis hit at the worst possible time, one of global economic contraction. And by enforcing contractionary policies on states that were already in a depression, economies in Europe are getting to Great Depression levels:

The key here is that the Euro system is not giving the public the idea that all peoples are in the same boat. It is giving the impression that some nations are benefiting at the expense of others.

For there can be no doubting the perception on the ground in Europe that Germany (the first nation, lest we forget, to violate the Stability and Growth Pact) is sado-masochistically brutalising the periphery in the name of its own prosperity. And the facts back that up:

Certainly, the steep austerity policies have in Portugal, Spain and Greece only produced bigger deficits as tax revenues have fallen. But what really matters is that Europeans more and more are coming to see the E.U. and the policies it enforces as counter to their interests and harmful. 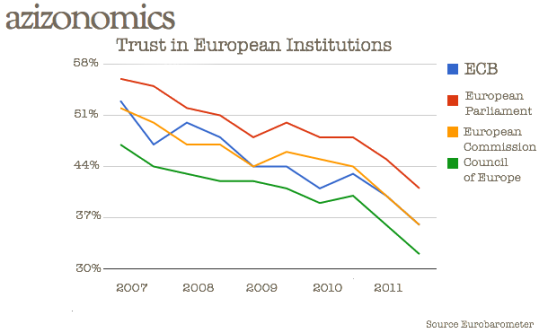 In the wake of WW2 there was deep and genuine grassroots concern throughout Europe for unity, and Europe should never have to go through another war. Yet the actions of this bureaucratic, centralising, technocratic institution are jeopardising that reality. This is top-down fragility transmitted throughout Europe by the actions of misguided planners.

I don’t believe that many Europeans really want to go down this path again. But as the European economies continue to bleed, as millions of youths remain jobless, those deep scars that thousands of years of war and violence created, culminating in the rise of Nazism and WW2, are rising again to the surface.