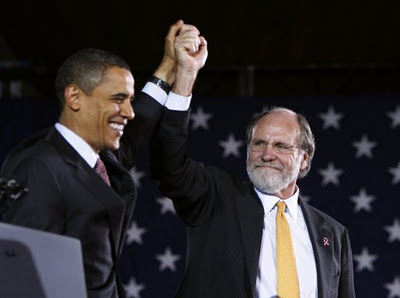 Obama and Corzine — A Match Made in Heaven?

Now I know that a lot of people on the left — disappointed by his banker-friendly, PATRIOT Act-renewing, indefinite-detention-enabling, American-citizen-assassinating regime — are searching for any reason to vote for him, and plausible reason to defend his record. That’s the nature of tribal politics — “anti-war” Democrats will happily protest the Bush war machine, but they seem quiet when Obama is the one using drone strikes to assassinate American citizens without trial. I don’t like Mitt Romney either, but that’s not the point.

Even for those in favour of gay marriage, let’s not forget that Obama is capable of doing absolutely zero to change the law. Want to introduce a Federal law allowing homosexual couples to marry? Good luck getting it through the Republican Congress.

I’m in favour of consenting adults being able to do whatever they like with each other, but the fact that the current push for gay marriage is supported by Lloyd Blankfein and Goldman Sachs makes me very suspicious (does he want to sell securitised gay marriage debt?).

It just seems like an easy issue for Obama to posture on, while trampling the Constitution into the dirt.

When it comes to civil liberties, Obama has always talked a good game, and then acted more authoritarian than Bush. He talked about an end to the abuses of the Bush years and an open and transparent government, yet extended the Fourth-Amendment-shredding Patriot Act, empowered the TSA to produce naked body scans and engage in humiliatingly sexual pat-downs, signed indefinite detention of American citizens into law, claimed and exercised the power to assassinate American citizens without trial, and aggressively prosecuted whistleblowers. Under his watch the U.S. army even produced a document planning for the reeducation of political activists in internment camps. Reeducation camps? In America? And some on the left are still crowing that talking about being in favour of gay marriage makes him “pro-civil liberties”? Is this a joke?

Here are a few metrics that we should be judging Obama on:

People not in the labour force is spiking: 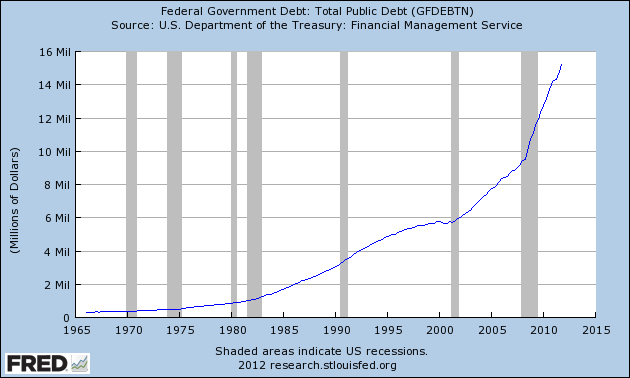 Meanwhile India, Iran, China, Russia, Saudi Arabia and Japan have all ditched the dollar for other currencies in new bilateral trade agreements — which lest us forget is America’s biggest export, and the product that keeps goods and oil flowing into America. This is an extremely dangerous time. While we cannot lump Obama with the blame for the entire U.S. economic system — the system we have was accumulated via Bush, and Cheney, and Paulson, and Clinton, and Bush, and Reagan, and Carter, and Brzezinski, and Nixon, and Kissinger, and Johnson, and Roosevelt and Wilson and Lincoln and probably most significantly of all the father of central banking Alexander Hamilton — Obama certainly has not improved matters.

And it should be obvious to anyone paying attention that Romney — who claims he would support the NDAA and the PATRIOT Act, that he wants to attack Iran, and has hired many ex-Bush staffers, as well as winning the endorsement of both Jeb and George H.W. Bush, and bizarrely claiming to want to start a trade war with China — is cut from the exact same cloth as Bush and Obama.

This is a dead election. Here’s hoping that Ron Paul — who continues to pick up delegates in the Republican race even while being ignored by the mainstream media who would rather talk about Obama’s posturing on gay rights — can cause some mayhem.