What would Obama supporters think if they learned that their beloved President was running far-to-the-authoritarian-right of arch-hawk Charles Krauthammer on one particular civil liberties issue?

Sadly, the answer is that most Obama supporters probably wouldn’t feel very much at all, because support for Obama has always been predominantly emotion-driven (he promised change “you can believe in”, not “change that I can logically convince you will be beneficial“).

But I digress. Charles Krauthammer weighed in on FOX yesterday to telegraph his opposition to bringing drone warfare to the skies of America. 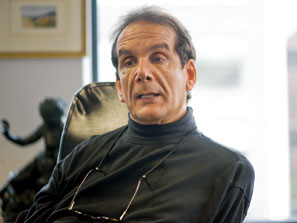 I’m going to go hard left on you here, I’m going ACLU. I don’t want regulations, I don’t want restrictions, I want a ban on this. Drones are instruments of war. The Founders had a great aversion to any instruments of war, the use of the military inside even the United States. It didn’t like standing armies, it has all kinds of statutes of using the army in the country.

I would say that you ban it under all circumstances and I would predict, I’m not encouraging, but I am predicting that the first guy who uses a Second Amendment weapon to bring a drone down that’s been hovering over his house is going to be a folk hero in this country.

The Founders were deeply opposed to the militarisation of civil society. There is all kinds of aversions to it and this is importing it because, as you say, it’s cheap, it’s easy, it’s silent. It’s something that you can easily deploy. It’s going to be, I think the bane of our existence. Stop it here, stop it now.

And this is a big deal. A recent report by Micah Zenko noted:

Worried about the militarization of U.S. airspace by unmanned aerial vehicles? As of October, the Federal Aviation Administration (FAA) had reportedly issued 285 active certificates for 85 users, covering 82 drone types. The FAA has refused to say who received the clearances, but it wasestimated over a year ago that 35 percent were held by the Pentagon, 11 percent by NASA, and 5 percent by the Department of Homeland Security (DHS). And it’s growing. U.S. Customs and Border Protection already operates eight Predator drones. Under pressure from the congressional Unmanned Systems Caucus — yes, there’s already a drone lobby, with 50 members — two additional Predators were sent to Texas in the fall, though a DHS official noted: “We didn’t ask for them.” Last June, a Predator drone intended to patrol the U.S.-Canada border helped locate three suspected cattle rustlers in North Dakota in what was the first reported use of a drone to arrest U.S. citizens.

But I’m going to go even further than the threat to civil liberties: I am fairly certain that the militarisation of U.S. airspace by drones is itself a huge national security threat. While Zenko notes that drones “tend to crash”, the downing of a U.S. drone over Iran late last year — supposedly via an Iranian hack — seems to suggest that it is possible for drones to be commandeered by hackers or hostile powers. And if that’s not the case today, then it almost certainly will be tomorrow. Putting drones into the air above the United States is like going to sleep on a bed of dynamite. It’s an invitation to anyone to try and commandeer a plane, possibly one stocked with high-tech weaponry.

The Federal government would do well to quit groping Grandma at the TSA checkpoint, and start worrying about the potential negative side-effects of systems they are putting into place. All the TSA security theater in the world cannot stop a determined hacker from commandeering a drone.

Charles Krauthammer is right (and after the Iraq invasion which he championed I never thought I would say that): it could be the bane of our existence. Stop it here. Stop it now.

66 thoughts on “Drone Warfare in America”