In twenty or thirty years, I expect future monetary historians looking back on this period of history to frequently misquote Ernest Hemingway:

How did the dollar die? First it died slowly — then all at once.

The slow death began with the dollar’s birth as a global reserve currency. America was creditor and manufacturer to the world, and the capitalist superpower. People around the globe transacted overwhelmingly in dollars. Above all else, people needed dollars to conduct trade, and they were willing to pay richly for them, and for dollar-denominated debt .

By the ’90s America began enjoying a tremendous free lunch — the world provided America with goods, resources and services, and Americans provided the global reserve currency, as well as acting as world military policing global shipping. Why manufacture at home, or produce resources at home when the world wants your currency? To get what you want, all you have to do is run your printing press — which was much easier after 1971, when Nixon ended the gold exchange standard. In a flat free-trade world, supply chains and technology agglomerated wherever the labour was cheapest, which was predominantly Asia. So America let her industrial base and her domestic supply webs degenerate, to enjoy the free lunch that the dollar brought: 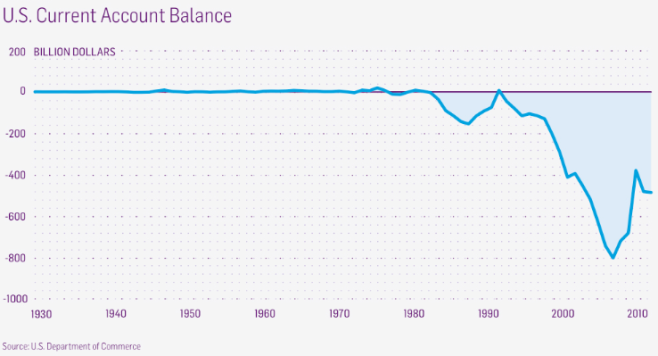 The next leg of the story is that foreigners realised that actually maybe the necessity of the dollar was an illusion. With America no longer the world’s manufacturer or creditor, who needs America? If you need a consumer, there are billions of people and trillions of dollars, and trillions of dollars worth of resources in Asia, and South America, and Europe. America’s government is deeply-indebted, and its military is bogged-down in difficult conflicts around the world.

We are like a man who used to be rich and is in the habit of paying for everybody’s meals and announces at a lavish dinner that he will pay the bill, only to then turn to the fellow sitting nearby and say, “Can I use your credit card? I will pay you back!”

While fund managers continue to refer to the dollar and the US treasury as a safe haven, America’s sovereign creditors seem to feel quite differently.

As Zhang Jianhua of the People’s Bank of China put it:

No asset is safe now. The only choice to hedge risks is to hold hard currency — gold.

So the ground seems to have fallen out from beneath the petrodollar world order.

Yet at the same time, the powers moving away from the dollar have a lot invested in the system. The two biggest sovereign holders of US treasuries are Japan and China. China alone holds $3 trillion of US currency, and $1 trillion of debt. They have no reason to crash the value of their own assets. Their planned endgame appears to be a slow, phased and managed transition to a new global reserve currency. China wants to gradually reduce their exposure to America, transferring to harder assets.

Yet history rarely turns out how nations have planned, and China itself seems increasingly beset with domestic problems.

China’s biggest banks may fall short of loan targets for the first time in at least seven years as an economic slowdown crimps demand for credit, three bank officials with knowledge of the matter said.

A decline in lending in April and May means it’s likely the banks’ total new loans for 2012 will be about 7 trillion yuan ($1.1 trillion), less than an estimated government goal of 8 trillion yuan to 8.5 trillion yuan, said one of the officials, declining to be identified because the person isn’t authorized to speak publicly. Banks are relying on small and mid-sized companies for loan growth after demand from the biggest state- owned borrowers dropped, the people said.

The drying up of loan demand attests to the severity of China’s slowdown and may add pressure on Premier Wen Jiabao to cut interest rates and expand stimulus measures. The economy may grow in 2012 at its slowest pace in 13 years, a Bloomberg News survey showed last week, as Europe’s debt crisis curbs exports, manufacturing shrinks and demand for new homes wanes.

China may be a manufacturing powerhouse, and the spider at the heart of global trade, but its domestic and social order looks in a state of disarray, pock-marked with ghost cities, industrial accidents and ecological disasters. And throwing stimulus money into an economy already recording screeching inflation will be like throwing fuel onto a fire.

As the Chinese (and wider Asian) economic picture becomes bleaker, pressure will grow on politicians to take more drastic and rash measures. They may try to rally the disaffected behind them with an increasingly confrontational nationalistic attitude to America. And unable to match America militarily, their major outlet would be economic warfare — competitive devaluation, threats, tariffs, export controls, and an all-out assault on the dollar reserve standard. Additionally, American policymakers also encumbered with huge economic problems may look to economic warfare as policy — the standout example is Mitt Romney’s desire to brand China as a currency manipulator for accumulating US treasuries and impose tariffs, even while the Treasury upgrades the PBOC to primary dealer status.

This brewing firestorm suggests that rather than the gradual transition that all parties claim to desire we are likely to see a much faster and more volatile one. I don’t know which straw will break the camel’s back, but it is likely to come sooner, rather than later. First slowly — now all at once.