In spite of the fact that 85% of Greeks want to stay in the Eurozone, I was reasonably confident that Greeks would support Syriza to a first-place finish, and elect a new government willing to play chicken with the Germans. However Greeks — predominantly the elderly — rejected change (and possible imminent Drachmatization) in favour of the fundamentally broken status quo. 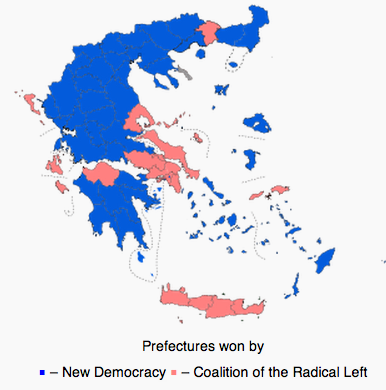 But although Syriza finished second, the anti-bailout parties still commanded a majority of the votes.

And New Democracy may still face a lot of trouble building a coalition to try to keep Greece in the bailout, and in the Euro . There has long been a rumour that Tsipras wanted to lose, so as to (rightly) blame the coming crush on the status quo parties. What fewer of us counted on was that the status quo parties wouldn’t want to win the election either. The pro-bailout socialists Pasok have thrown a monkey wrench into coalition-building by claiming they won’t take part in any coalition that doesn’t also include Syriza. This seems rational; when the tsunami hits, all parties in government will surely take a lot of long-term political damage. Pasok have already been marginalised by the younger and fierier Syriza, and Pasok presiding over an economic collapse (for that is undoubtedly what Greece now faces) would surely have driven Pasok into an abyss. The economy is such a poisoned chalice that parties seem willing to fight to keep themselves out of power.

And with more austerity, it’s only going to get worse. Once a society is hooked on large-scale debt-fuelled state spending, austerity in the name of government deleveraging is tough enough when the economy is booming, but during a depression as spending falls, tax revenues fall, very often producing (as has been the case in Greece, Spain, Portugal and the UK) even bigger deficits.

So let us not forget who the most welfare-dependent nations (i.e. the ones who would be hurt the most by attempting an austerity program during an economic depression) are in Europe (clue — it’s not Greece):

International economics is a fast game. It’s only sixty years since America was exporter and creditor to the world. It’s only fifteen years since the now-booming German economy was described as the “sick man of Europe”.

The same Euro system that is slamming Greece, Portugal, Spain and Italy today — in the aftermath of bubbles caused by easy money flowing into these countries as a result of the introduction of the Euro — could (if it were to somehow survive)  do the same thing to Germany in ten or twenty or thirty years.

No matter how many nations are browbeaten by fear into committing to the status quo, it still won’t be sustainable. Greeks (and the other peripheral populations) can commit to austerity from here to eternity, but it won’t stop those policies resulting in deeper contraction, and more economic catastrophe.

But the collapse of the Euro would at most-recent estimates cost the core and particularly Germany a lot more than handing over the money to the PIGS. Eventually they will hand over the money to shield themselves from falling masonry. The real question is whether or not the entire system will spiral into pandemonium before Germany blinks.

37 thoughts on “The Welfare Kings of Europe”