I don’t think Krugman’s descriptive work on global trade patterns is bad. I don’t even think he has been completely wrong about the post-2008 economic depression. He certainly hasn’t been wronger than the people who are in charge in Europe, or the people running the Fed; he did, after all warn in 2005 that the Fed was “running out of bubbles” to reinflate, while Bernanke was still claiming in 2007 that subprime was contained.

I do think his defence of broken windows is facile, and I think the notion he has advanced that World War 2 ended the Great Depression is not just wrong but dangerous.

He’s a good polemicist; he defines himself through big, bold, wildly partisan claims. But if he’s going to claim that he’s been right about everything — as he just did — he might want to make sure he’s not directly contradicting statements he made just a week previous.

I (and those of like mind) have been right about everything.

However on June 11th Krugman wrote:

People like me may not have been right about everything, but have accumulated a pretty darn good track record over the past 5 years.

Nobody can be right about everything. Claiming that you have been is just silly hyperbole which will end up making you look bad especially when your record is, in reality, quite mixed. And if his goal is to convince policy-makers to ditch austerity (a goal that I share, at least for the time-being), he’s not going to do it by sticking his foot in his mouth. 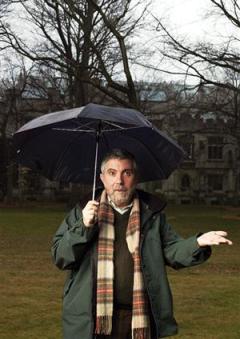 48 thoughts on “Krugman Claims He Has Been Right About Everything”