Expansionary monetary policy constitutes a transfer of purchasing power away from those who hold old money to whoever gets new money. This is known as the Cantillon Effect, after 18th Century economist Richard Cantillon who first proposed it. In the immediate term, as more dollars are created, each one translates to a smaller slice of all goods and services produced.

How we measure this phenomenon and its size depends how we define money. This is illustrated below.

Here’s GDP expressed in terms of the monetary base:

And here’s GDP expressed in terms of total debt:

What is clear is that the dramatic expansion of the monetary base that we saw after 2008 is merely catching up with the more gradual growth of debt that took place in the 90s and 00s.

While it is my hunch that overblown credit bubbles are better liquidated than reflated (not least because the reflation of a corrupt and dysfunctional financial sector entails huge moral hazard), it is true the Fed’s efforts to inflate the money supply have so far prevented a default cascade. We should expect that such initiatives will continue, not least because Bernanke has a deep intellectual investment in reflationism.

This focus on reflationary money supply expansion was fully expected by those familiar with Ben Bernanke’s academic record. What I find more surprising, though, is the Fed’s focus on banks and financial institutions rather than the wider population.

It’s not just the banks that are struggling to deleverage. The overwhelming majority of nongovernment debt is held by households and nonfinancials:

The nonfinancial sectors need debt relief much, much more than the financial sector. Yet the Fed shoots off new money solely into the financial system, to Wall Street and the TBTF banks. It is the financial institutions that have gained the most from these transfers of purchasing power, building up huge hoards of excess reserves: 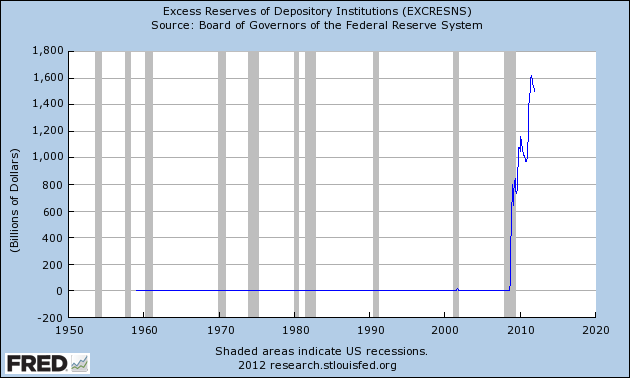 There is a way to counteract the Cantillon Effect, and expand the money supply without transferring purchasing power to the financial sector (or any other sector). This is to directly distribute the new money uniformly to individuals for the purpose of debt relief; those with debt have to use the new money to pay it down (thus reducing the debt load), those without debt are free to invest it or spend it as they like.

While we delever, investment by American corporations will be timid, and economic growth will be faltering at best. The stimulus imparted by government deficits will attenuate the downturn — and the much larger scale of government spending now than in the 1930s explains why this far greater deleveraging process has not led to as severe a Depression — but deficits alone will not be enough. If America is to avoid two “lost decades”, the level of private debt has to be reduced by deliberate cancellation, as well as by the slow processes of deleveraging and bankruptcy.

In ancient times, this was done by a Jubilee, but the securitization of debt since the 1980s has complicated this enormously. Whereas only the moneylenders lost under an ancient Jubilee, debt cancellation today would bankrupt many pension funds, municipalities and the like who purchased securitized debt instruments from banks. I have therefore proposed that a “Modern Debt Jubilee” should take the form of “Quantitative Easing for the Public”: monetary injections by the Federal Reserve not into the reserve accounts of banks, but into the bank accounts of the public — but on condition that its first function must be to pay debts down. This would reduce debt directly, but not advantage debtors over savers, and would reduce the profitability of the financial sector while not affecting its solvency.

Without a policy of this nature, America is destined to spend up to two decades learning the truth of Michael Hudson’s simple aphorism that “Debts that can’t be repaid, won’t be repaid”.

The Fed’s singular focus on the financial sector is perplexing and frustrating, not least because growth remains stagnant, unemployment remains elevated, industrial production remains weak and America’s financial sector remains a seething cesspit of corruption and moral hazard, where segregated accounts are routinely raided by corrupt CEOs, and where government-backstopped TBTF banks still routinely speculate with the taxpayers’ money.

The corrupt and overblown financial sector is the last sector that deserves a boost in purchasing power. It’s time this ended.

83 thoughts on “The Cantillon Effect”