Yesterday, I strongly insinuated that easy monetary policy enriches the financial sector at the expense of the wider society. I realise that I need to illustrate this more fully than just to say that when the central bank engages in monetary policy, the financial sector gets the new money first and so receives an ex nihilo transfer of purchasing power (the Cantillon Effect).

The first inkling I had that this could be the case was looking at the effects of quantitative easing (monetary base expansion) on equities (S&P500 Index), corporate profits and employment.

While quantitative easing has dramatically reinflated corporate profits, and equities, it has not had a similar effect on employment (nor wages).

However there are lots other factors involved (including government layoffs), and employment (and wages) is much stickier than either corporate profits or equities. It will be hard to fully assess the effects of quantitative easing on employment outcomes without more hindsight (but the last four years does not look good). 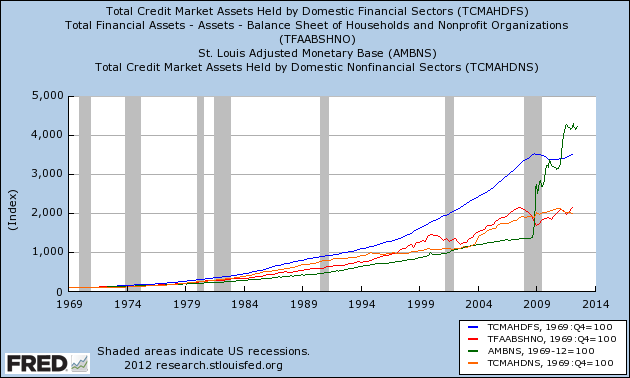 This disparity has not been driven by growth in the monetary base, which lagged behind until 2008. Instead it has been driven by other forms of money supply growth, specifically credit growth.

This is the relationship between financial sector asset growth, and growth of the money supply:

And growth of the money supply inversely correlates with changes in the Federal Funds rate; in other words, as interest rates have been lowered credit creation has spiked, and vice verse:

The extent to which M2 is driven by the Federal Funds rate (or vice verse) is not really relevant; the point is that the Fed’s chosen transmission mechanism is inherently favourable to the financial sector.

The easing of credit conditions (in other words, the enhancement of banks’ ability to create credit and thus enhance their own purchasing power) following the breakdown of Bretton Woods — as opposed to monetary base expansion — seems to have driven the growth in credit and financialisation. It has not (at least previous to 2008) been a case of central banks printing money and handing it to the financial sector; it has been a case of the financial sector being set free from credit constraints.

This would seem to have been accentuated by growth in nontraditional credit products (what Friedrich Hayek called pseudo-money, in other words non-monetary credit) in the shadow banking sector:

Monetary policy in the post-Bretton Woods era has taken a number of forms; interest rate policy, monetary base policy, and regulatory policy. The association between growth in the financial sector, credit growth and interest rate policy shows that monetary growth (whether that is in the form of base money, credit or nontraditional credit instruments) enriches the recipients of new money as anticipated by Cantillon.

This underscores the need for a monetary and credit system that distributes money in a way that does not favour any particular sector — especially not the endemically corrupt financial sector.

Tyler Durden answers my question in one graph:

31 thoughts on “Does Easy Monetary Policy Enrich the Financial Sector?”