In attempting to stimulate risk appetite by taking “safe” assets out of the market, the Fed has actually achieved precisely the opposite of stimulating productive investment. First, it has turned bond markets into a race to the bottom as bond flippers end up piling into the very assets that the Fed is trying to discourage ownership of  — because who cares about low yields when the Fed will jump in at an even lower price floor, thus assuring the bond flippers a profit? Second it has energised other safe asset markets (such as gold) as longer term investors look for alternatives to preserve their purchasing power in the context of a global economic depression.

The Fed is firing at the wrong target; the real problem — the thing that is causing investors to scramble for safe assets — is an economic depression brought on by (among other non-monetary causes) the deleveraging costs of an unsustainable debt bubble. Without addressing the problem of excess total debt — and quantitative easing aims to increase lending — recovery remains distant.

Fed purchases are the equivalent of hoarding the system’s supply of safe assets on the Fed’s own balance sheet, and in so doing preventing private investors — especially money market investors – from investing in the assets on favourable terms.

While this is mostly the point of QE — the idea, after all, is to stimulate risk appetite and cause investors to change their portfolios — a continued lack of risk appetite means the money created, rather than flowing into risky securities as hoped, is only crowding out the last remaining safe securities in the market instead. The consequences are negative rates and principal destruction — a lethal combination that is arguably far more dangerous and deflationary than no QE at all.

The idea that the Treasury could once again become the gold buyer of last resort, in exchange for liquidity, is interesting to say the least. Not only would such a strategy ease the squeeze in the Treasury market, it would do so without compromising the liquidity effects of QE.

What’s more it could help to support and stabilize the gold price, while taking zero-yielding safe assets out of the system in favour of yield bearing ones — giving money markets a fighting chance for survival in terms of yields.

While gold purchases have never been communicated as official central bank policy, there’s no denying that a shift in this direction is taking place. Be that wittingly or unwittingly.

A little behind the curve.

Bernanke has already heavily targeted yields on treasuries which have absorbed liquidity that has departed from productive ventures. But in recent years gold has offered a significantly increased return over treasuries.

So what’s a central banker who wants to force investors into productive ventures to do? You can’t print gold — but you can buy it, and take it out of the marketplace.

And as the price of gold (in fiat) continues to rise, buying gold is exactly what Western central bankers may do.

Just as Roosevelt went out of his way to remove gold from the marketplace, the central bankers of today may eventually determine to do the same thing. 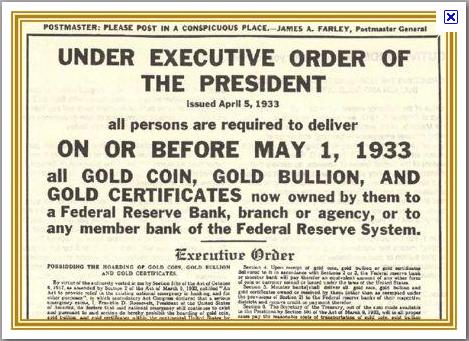 20 thoughts on “A Step Toward Gold Confiscation?”