So Romney has picked Paul Ryan for Vice President; a man with a remarkably similar “deficit-reduction” strategy to that of George Osborne here in the UK, where unemployment and budget deficits have soared, and GDP remains well off its peak.

If Ryan or his Democratic rivals really understood the budget deficit, they would understand that its huge size is a result coming primarily out of a depression brought on by excessive total debt:

As debt soared from the 80s to the 90s, tax revenues soared as the economy boomed on borrowed money. But as the debt continued to grow relative to income, the costs of the debt mountain meant that income that might once have been invested in businesses and consumption went toward debt service instead. And so once we hit the point at which debt repayment exceeded new debt acquisition, we were flung into a depression. This has had a relatively severe impact on growth; since the deleveraging hit in 2008, GDP growth fell considerably from its long-term trend (nominal potential GDP):

So with the private sector (not to mention state and local governments) who acquired so much debt in the boom now deleveraging, Federal revenue has dramatically fallen, producing the huge Federal budget deficits we see today. Of course, Federal spending was on an unsustainable trajectory before that. But without a serious plan to get America out of the deleveraging trap (there are three routes out — liquidation, inflation and debt forgiveness) all talk of reforming entitlements is meaningless.

So, does Ryan’s plan address the problem of excessive debt?

No. Ryan completely misses the point of excessive total debt, and instead paints a portrait of the problem being one of excessive public debt: 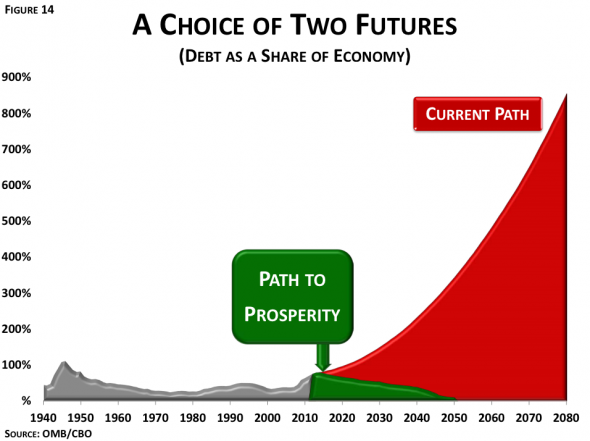 Oh no! What a scary chart! But Ryan claims he is going to make public deficits disappear! How?

Ryan intends to cut taxes; reducing corporate taxes from 35% to 25%, and introducing two new income tax brackets; one of 10%, the other of 25%.

But here’s Federal tax revenues compared to the weight of total debt: 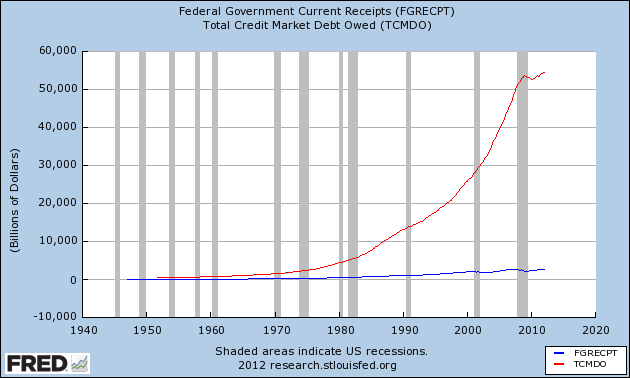 To get private debt to a sustainable level via tax cuts, Ryan would have to cut taxes to zero for a very long time (and hope that people use their tax cut to pay down debt instead of spending it at Chipotle and the Apple Store).

The biggest problem with that? Over 75% of Federal spending is mandated by law, and so US public debt — which Ryan believes is the real problem — would soar (as has happened in Britain). Ryan might seem worried about the future possibility of massive public debt (as opposed to the current reality of massive total debt), but his plan could conceivably result in much higher public debt  — after all the OMB and CBO have gotten it all very wrong before, just twelve years ago foreseeing massive tax surpluses of $48 and $87 billion respectively in 2012.

So does he have any real plan to significantly raise revenues?

Ryan intends by 2022 to have closed enough loopholes to yield an extra $700 billion in revenue every year. That’s a lot of money. So which loopholes does Ryan claim that he will be able to close?

In his entire 98-page manifesto, Ryan doesn’t name any — but he has ruled out taxing capital gains as income, surely the biggest tax loophole of all, and one that has seriously benefited his running mate.

Ryan might talk tough on public deficits, but his own figures show that even if he can raise the revenue he claims to be able to raise (very dubious), the deficits won’t be gone for twenty years. Meanwhile, he has not even approached the subject of excessive total debt, which is the real problem.

The only policies likely to return the US to strong organic growth are those that would produce some form of debt jubilee. Neither of the major parties has any plan for that.