Student debt levels continue to soar. In 2012 they hit $1 trillion for the first time ever.

But college education isn’t reaping the rewards it once did.

According to the Associated Press:

About 1.5 million, or 53.6 percent, of bachelor’s degree-holders under the age of 25 last year were jobless or underemployed, the highest share in at least 11 years.

And real wages have fallen for recent college graduates — although this has been part of a broader trend of falling real wages in the general population: 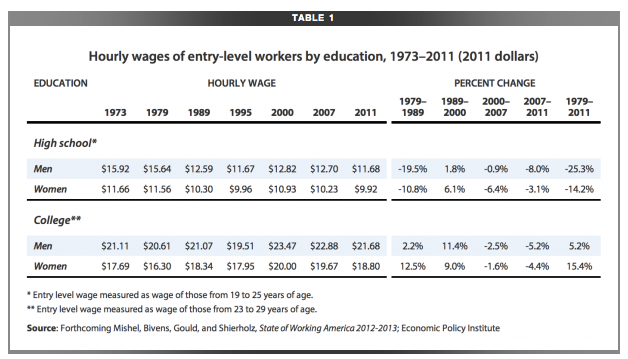 So why is student debt still soaring?

The crucial factor is that student debt isn’t like other debt — it cannot be discharged simply through bankruptcy.

There’s no incentive for private lenders to be particularly careful in who they lend money to, becuase they know that there’s no way that whoever they lend the money to will ever be able to get rid of the debt short of dying.

But just because a loan is nondischargeable doesn’t mean that the loanee will be able to repay. With labour conditions for recent graduates still quite awful, student debt defaults have climbed. The Washington Times notes:

The number of borrowers defaulting on federal student loans has risen substantially, highlighting concerns that rising college costs, low graduation rates and poor job prospects are getting more and more students over their heads in debt.

The national two-year cohort default rate rose to 8.8 percent last year, from 7 percent in fiscal 2008, according to figures released Monday by the Department of Education.

That means that more unemployed former students will end up being hounded for debts that they cannot afford to repay, yet cannot discharge through bankruptcy. If those debts had been accrued at the roulette wheel, though, they could.

This presents a bigger problem than simply sending people to college who end up unemployed or underemployed. It means that capital is being misallocated. If debt for education cannot simply be discharged through bankruptcy, as other debt can be, private lenders will tend toward offering much more of the nondischargeable debt, and less of dischargeable debt. This means that there is less capital available for other uses — like starting or expanding a business. If the government’s regulatory framework leans toward sending more people to college, more people will go (the number of Americans under the age of 25 with at least a bachelor’s degree has grown 38 percent since 2000) — but the money and resources that they are loaned to do so is money and resources made unavailable for other purposes.

The efficient allocation of capital demands that lending is undertaken based on the real underlying market conditions. To ensure that this is the case, the bankruptcy rules for debt should be universal so that loan applications are considered on merit. This should mean that student loan debt should be dischargeable under the same bankruptcy conditions as other debt. More discerning lenders would likely mean less student lending — but would also mean that potential students would have to think harder about the decision to study, and be able to justify to themselves and to a lender why they are choosing to study (or why they are choosing to study a particular subject), instead of choosing to work, or choosing to start a business.