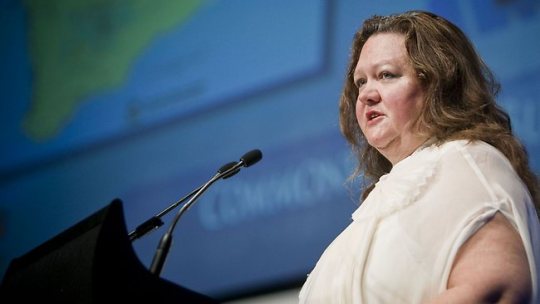 If you’re jealous of those with more money, don’t just sit there and complain. Do something to make more money yourself — spend less time drinking, or smoking and socializing and more time working.

Today she claimed that Australians should be willing to work for less than $2 a day:

Australian mining magnate Gina Rinehart has criticised her country’s economic performance and said Africans willing to work for $2 a day should be an inspiration.

The richest woman in the world is making an increasing number of public appearances, and speaking of increasingly controversial topics.

It couldn’t be that she is becoming increasingly aggressive and controversial because her core business is in trouble, could it?

Australia’s mining boom is not over and its ‘death’ has been exaggerated.

That is her “subprime is contained” moment.

Larry Elliott explodes the myth that this time is different:

Commodity-rich countries, like Australia, have never had it so good. China takes 25% of Australia’s exports and iron ore accounts for 60% of all the goods Australia sells to China. One reason Australia avoided recession during the global downturn of 2008-09 was that it had a well-run banking system. A much bigger reason was that the country had become a giant pit from which China could extract the minerals it needed for its industrial expansion. Money flooded into the country from sovereign wealth funds and hedge funds looking for AAA investments. The Australian dollar has soared, as have property prices.

China’s economy is now slowing, and although the economic data is not particularly reliable, it seems to be slowing fast. The country has two million unsold homes, with another 30 million under construction. There is a glut of iron ore and the price is falling. Where does that leave Australia? Horribly exposed, quite obviously. It has an over-valued currency, an over-valued property market, and its major customer is now desperately pulling every available policy lever in the hope of avoiding a hard landing. Whatever happens, the Australian dollar is a sell. Just how big a sell will depend on how successful Beijing is in reflating the Chinese economy.

55 thoughts on “Gina Rinehart is a Bubble”