A whole lot of pundits are spending column inches trying to explain the cruel reality of the last forty years — stagnant wages for full-time male workers, and falling wages for men as a whole:

And there has been a huge outgrowth of men who aren’t in the labour force. In 1954, 96 percent of American men between the ages of 25 and 54 worked. Today, that number is down to 80 percent. That’s a humungous decrease.

The question is why.

In The End of Men: And the Rise of Women, Hanna Rosin argues that changes in the world economy have dramatically shifted gender roles. Women have adapted more skillfully to the new socioeconomic landscape by doggedly pursuing self-improvement opportunities, rebranding as the economy requires it, and above all possessing the kind of 21st century work attributes — such as strong communication skills, collaborative leadership and flexibility — that are nudging out the brawny, stuck-in-amber guys. Rock steadiness, long a cherished masculine trait, turns out to be about as useful in our fleet-footed economy as a flint arrowhead. Life favors the adapters, and it turns out they’re more likely to be women.

Now two things have very clearly changed for women — access to birth control, and the end of the traditional social compact where women did housework, and men did wage work. In regard to the vast majority of expanding occupations today — teaching, medical services, bureaucracy — women no longer are at a material disadvantage due to their (on average) smaller size and lesser strength.

But it’s not just that women have been advantaged. Men have been deeply disadvantaged. In sectors that due to physical characteristics men have traditionally been dominant in — manufacturing, agriculture, forestry, mining and heavy industry — there has been a vast decline in output-as-a-percentage-of-GDP, whereas in services — a sector in which men have not traditionally dominated — there has been a vast increase. 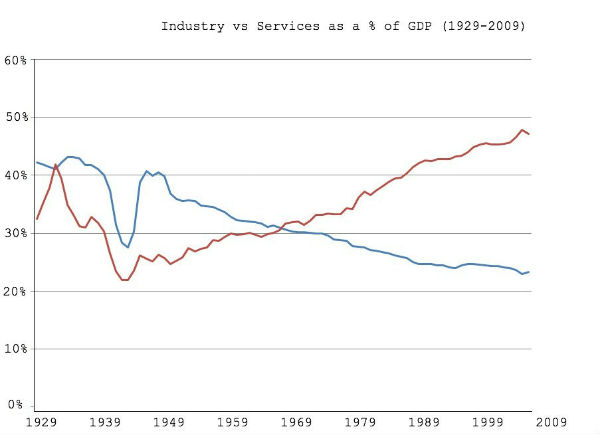 Yet it is not the case that there are less manufacturing jobs globally. As we mostly already know, this is a case of manufacturing and industry being exported overseas, most obviously to China. China manufactures, and America consumes. This is America’s trade balance with China:

This is reflected in China’s sectoral employment balance compared to Western nations, and the world at large:

Yet the present paradigm has severely damaged the prospects of young men, for whom a generation ago jobs in industry and manufacturing were once plentiful. Quantitative easing led to a jobs boom — in China, for Chinese industrial workers. That doesn’t help the growing chunk of the male population in the United States who have been shut out of the job market by the rise of America’s Chinese addiction.

And it seems unlikely that the industrial jobs are coming back any time soon. Although there are reasons why America may soon import less from China — rising energy and transport costs, rising Asian wage costs, and questions of the dollar’s sole reserve currency status — there are plenty of places in Latin America with cheap and plentiful labour for America’s corporate elite to set up factories. Even the manufacturing jobs that remain in America will be under threat from increased automation and robotics.

This implies that barring a miracle, joblessness and stagnant or falling real wages will continue to be a significant and worsening challenge for young Americans, and particularly men, in the coming years.