Netanyahu wants a red line on nuclear proliferation in the Middle East: 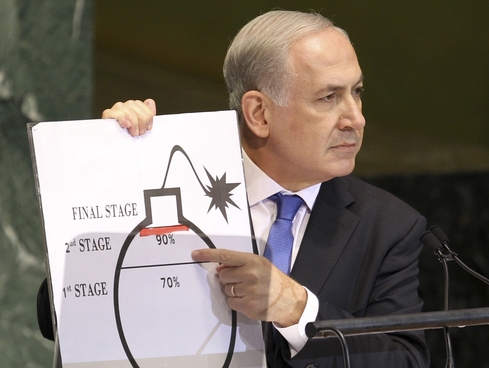 Where exactly should we draw it? 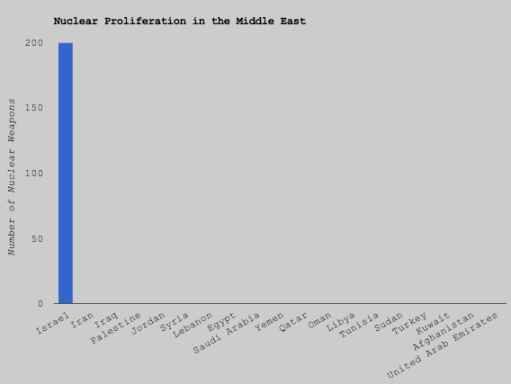 Here is a nation which refuses to even admit it acquired nukes long ago, and which disdains the Nonproliferation Treaty, making the case for war against a neighbor that has indeed signed the NPT and is abiding by its requirements.

That treaty gives Tehran the right to develop nuclear power. Furthermore, there is zero evidence Iran is embarked on a nuclear weapons program: our own intelligence community tells us they gave that up in 2003 and show no signs of resuming it. Their own religious and political leaders have denounced the possession of nuclear weapons as sinful: the Israelis, on the other hand, haven’t bothered reassuring us they would never use the nuke they won’t admit they have.

In a rational world, Israel would be in the dock, answering for its unwillingness to come out of the nuclear closet and admit what the whole world knows by now.

The West has sent out a message that the only way for unpopular regimes to avoid invasion is to obtain nuclear weapons. North Korea sought and obtained nuclear weapons and their vicious and economically-failed regime has stayed in power. Qaddafi gave up his nuclear ambitions, and was soon deposed by British, French and American airpower. If Iran is seeking a nuclear weapon — and the CIA and Mossad, as well as the IAEA agree they that they are not currently doing so — perhaps the fact that nuclear-armed Israel and the nuclear-armed United States keep threatening non-nuclear Iran with attack has something to do with it?

And even assuming that they are going for a nuclear weapon, how close is Iran to a nuclear weapon? According to former IAEA consultant Clinton Bastin, possibly as much as ten to fifteen years away:

Iran may be in your red zone, but can not score.

Sure, Iran could divert a few tons of 3.5% or a ton of 20% enriched uranium hexaflouride gas for enrichment to 90+%. But what then?

No one has ever made a nuclear weapon from gas. It must be converted to metal and fabricated into components which are then assembled with high explosives.

Iran lacks experience with and facilities for these processes which are very dangerous because of potential for a criticality accident or nuclear explosion. Iran would not jeopardize its important, fully safeguarded nuclear programs by an attempt to have a deliverable, one kiloton yield nuclear weapon ten to fifteen years later.

IMPORTANT NOTE: North Korea was able to make and test a nuclear explosive soon after withdrawing from safeguards because plutonium for reactor recycle was in a form usable for a weapon.

So let’s be clear about who is threatening who: 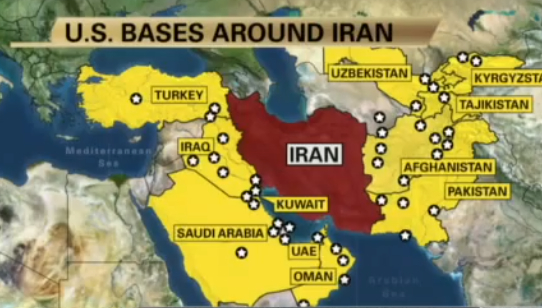 Iran is not blameless, and continues to provoke Israel through its support for Hamas and Hezbollah and through eliminationist rhetoric. But given the level of provocation from the Israeli and American side, it is astonishing that Iran remains free of nuclear weapons. Yet it is a fact that Iran is not armed with nuclear weapons, and it remains a fact that Iran has not attacked nor occupied any foreign lands since World War 2. Iran is not an expansionistic country.

As neocon provocateur Patrick Clawson essentially admitted in advocating for a false flag attack to get America to war, Iran is not likely to attack either the United States or Israel. So when it comes to drawing red lines, we in the West would do well to draw a red line around our behaviour — because right now, we in the West are the ones who are stirring up trouble by threatening to strike first.