The point of my writing has never been to tell others how to vote, especially not in elections in countries like the USA where I cannot myself vote.

But even if I was a voter in this election, there is no candidate with a chance in hell of winning who I could support. Obama and Romney are standing on the shoulders of George W. Bush. 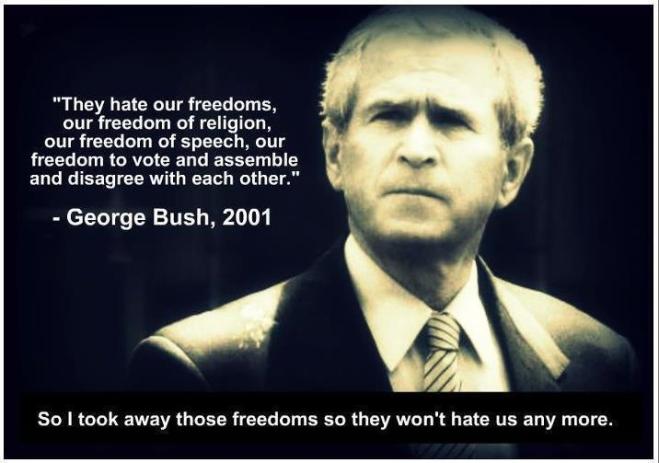 Obama renewed Bush’s PATRIOT Act, which gutted the Fourth Amendment, Obama signed into place (and went to court to defend) the NDAA Act that creates a legal framework  for the indefinite detention of American citizens, Obama has engaged in six middle eastern wars (two more than Bush), and Obama maintains a kill-list of suspected terrorists including American citizens who — without trial, and alongside their families — are targeted for assassination by drone strike. Romney signs on to all of those initiatives, and boasts the endorsements of both George W. Bush and Dick Cheney. Both candidates promise to strike first against Iran. Neither candidate talks of downsizing the American Empire, that — at huge cost to the taxpayer — maintains bases in over 150 countries, creates huge blowback, and leaves the American military thinly stretched. And this misallocation of capital means that in areas where central government plays a useful role — infrastructure, space exploration, disaster relief and scientific research — too little is left to invest.

On the economy, both candidates are avowed interventionists who endorse bank bailouts and the bailouts of failed and unsustainable industries. Bailouts result in the malinvestment of capital, labour and productivity — giving too-big-to-fail banks and crooked and fraudulent banksters the opportunity to continue profiting from mountains of central bank liquidity, while small businesses and new entrepreneurs starve from a lack of credit. And neither candidate has any intention of implementing a solution — like Glass Steagall, which worked relatively well for over sixty years —  to end the tyranny of public bailouts. Additionally, neither candidate seems aware of the real cause of depressions — excess and unsustainable total debt. Both candidates seem intent to pursue policies of reinflating debt bubbles, only for them to burst again later rather than try to address the underlying problems. This approach is likely to render social spending pledges unsustainable, as the only thing that can pay for Social Security and present welfare commitments is strong organic productive growth, not endless bailouts of crooked banksters, mobility scooters, new social networks and the pointless reinflation of unsustainable businesses.

Both candidates are committed to one-sided free trade deals that end up shipping productive American jobs half way around the world, and rendering Americans dependent on the output of other nations. And while (much like George W. Bush) both candidates have paid lip-service to the idea of energy independence, they also support the idea of a resource-sapping global military empire, which leaves few resources remaining for the task of creating energy independence.

And both candidates promise to continue the expensive, wasteful and liberty-sapping war on drugs — even though Obama was a proud and boastful drug user in his youth.

One candidate will be elected today, and their supporters will surely go wild, while the other side will be despondent. But sadly, both sides will have lost. The only winners under Obama-Romney will be crooked too-big-to-fail banksters, and the military-industrial complex.