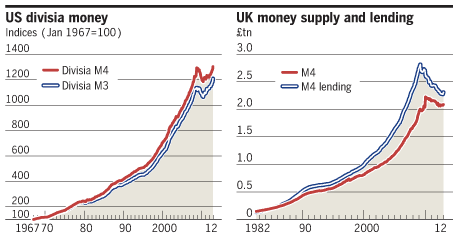 Could this divergence explain the strong divergence between UK and US real GDP? 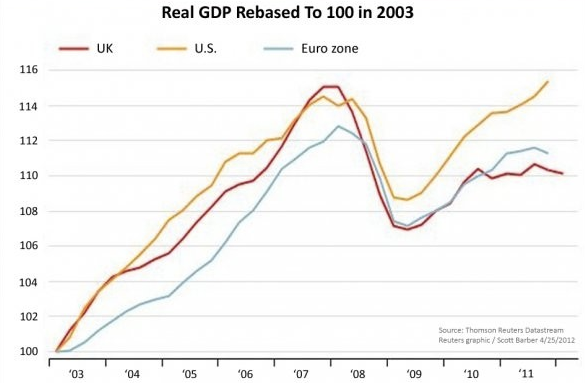 I doubt it. It’s a chicken and egg question — does a prolonged deleveraging cycle explain real GDP weakness, or does real GDP weakness explain the prolonged deleveraging cycle? It may in fact be a self-reinforcing spiral effect where the first leads to the second and the second leads to more of the first, and so on. But there are a lot of other factors all of which may be contributing to the worsening situation — protracted weakness in business confidence, tax hikes, spending cuts, weak growth in the Eurozone, elevated youth unemployment, and uncertainty. All these factors are probably contributing to some degree to the weak GDP growth, and the prolonged deleveraging, and thus Britain’s depressionary economic condition. 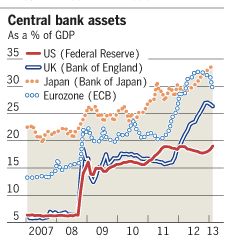 How can we break the cycle? Well, as the above graph shows, more quantitative easing is unlikely to have a beneficial effect. The transmission mechanism is broken. What good is new money if it’s just sitting unused on bank balance sheets? What new productive or useful output can be summoned simply by stuffing the banks full of money if they won’t lend it?

The sad truth is that a huge part of the financial sector has failed. Its inefficiencies and fragilities were exposed in 2008, as a default cascade washed it into a liquidity crisis. And yet we have bailed it out, stuffed it full of money in the hope that this will bring us a new prosperity, in the delusional hope that by repeating the mistakes of the past, we can have a prosperous future.

The sad truth is that the broken, sclerotic parts of the financial sector must fail or be dismantled before the banks will start lending again, start putting monies into the hands of people who can create, innovate and produce our way to growth.