According to Bloomberg, the vast majority of the Big Five banks’ profits consisted of a taxpayer subsidy — the Too Big To Fail guarantee. If the Too Big To Fail banks had to lend at the rates offered to their non-Too Big to Fail competitors, their profits would be severely shrunk (in some cases, to a net loss): 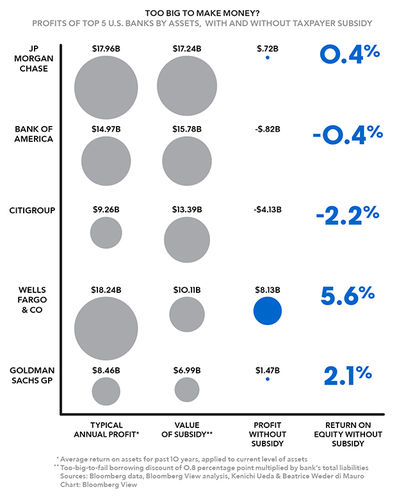 What does that mean?

That means that the American financial sector is a zombie, existing on the teat of the taxpayer.

It means the huge swathes of liquidity spent on saving the financial sector are ultimately good money chasing after bad.

The U.S. financial industry — with almost $9 trillion in assets, more than half the size of the U.S. economy — would just about break even in the absence of corporate welfare. In large part, the profits they report are essentially transfers from taxpayers to their shareholders.

Neither bank executives nor shareholders have much incentive to change the situation. On the contrary, the financial industry spends hundreds of millions of dollars every election cycle on campaign donations and lobbying, much of which is aimed at maintaining the subsidy. The result is a bloated financial sector and recurring credit gluts.

This is extremely prescient stuff. The Fed since 2008 has reinflated the old bubbles, while allowing the same loot-and-pillage disaster-corporatist financial model to continue.

It is insane to repeat the same methods and expect different results. This credit glut, this new boom that has seen stocks rise closer and closer to their pre-crisis high (which may soon be exceeded) will just lead to another big 2008-style slump, just as the Fed’s reinflation of the burst tech bubble led to 2008 itself. This time the spark won’t be housing, it will be something else like an energy shock, or a war. Something that the Federal Reserve cannot directly control or fix by throwing money at it.

America (and the Western world in general) post-2008 needed real organic domestic growth built on real economic activity, not a reinflated bubble that let the TBTF financial sector continue to gorge itself into oblivion.

33 thoughts on “The Unsustainable US Financial Sector”