Paul Krugman just did something mind-bending. 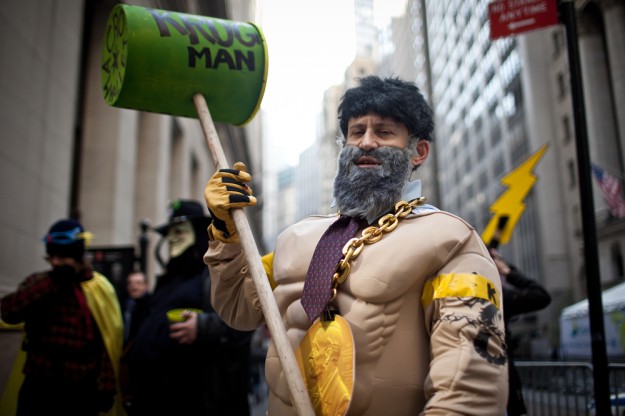 Business Insider reports on a Bloomberg TV interview with hedge fund legend Stan Druckenmiller that helped crystallize in my mind what, exactly, I find so appalling about people who say that we must tighten monetary policy to avoid bubbles — even in the face of high unemployment and low inflation.

Druckenmiller blames Alan Greenspan’s loose-money policies for the whole disaster; that’s a highly dubious proposition, in fact rejected by all the serious studies I’ve seen. (Remember, the ECB was much less expansionary, but Europe had just as big a housing bubble; I vote for Minsky’s notion that financial systems run amok when people forget about risk, not because central bankers are a bit too liberal)

Krugman correctly identifies the mechanism here — prior to 2008, people forgot about risk. But why did people forget about risk, if not for the Greenspan put? Central bankers were perfectly happy to take credit for the prolonged growth and stability while the good times lasted.

Greenspan put the pedal to the metal each time the US hit a recession and flooded markets with liquidity. He was prepared to create bubbles to replace old bubbles, just as Krugman’s friend Paul McCulley once put it. Bernanke called it the Great Moderation; that through monetary policy, the Fed had effectively smoothed the business cycle to the extent that the old days of boom and bust were gone. It was boom and boom and boom.

So, people forgot about risk. Macroeconomic stability bred complacency. And the longer the perceived good times last, the more fragile the economy becomes, as more and more risky behaviour becomes the norm.

Stability is destabilising. The Great Moderation was intimately connected to markets becoming forgetful of risk. And bubbles formed. Not just housing, not just stocks. The truly unsustainable bubble underlying all the others was debt. This is the Federal Funds rate — rate cuts were Greenspan’s main tool — versus total debt as a percentage of GDP:

More damningly, as Matthew C. Klein notes, the outgrowth in debt very clearly coincided with an outgrowth in risk taking:

To any competent central banker, it should have been obvious that the debt load was becoming unsustainable and that dropping interest rates while the debt load soared was irresponsible and dangerous. Unfortunately Greenspan didn’t see it. And now, we’re in the long, slow deleveraging part of the business cycle. We’re in a depression.

In endorsing Minsky’s view, Krugman is coming closer to the truth. But he is still one crucial step away. If stability is destabilising, we must embrace the business cycle. Smaller cyclical booms, and smaller cyclical busts. Not boom, boom, boom and then a grand mal seizure.