With the British economy in a worse depression than the 1930s , bank lending to businesses severely depressed, and unemployment still high, a sane finance minister’s main concern might be resuscitating growth. 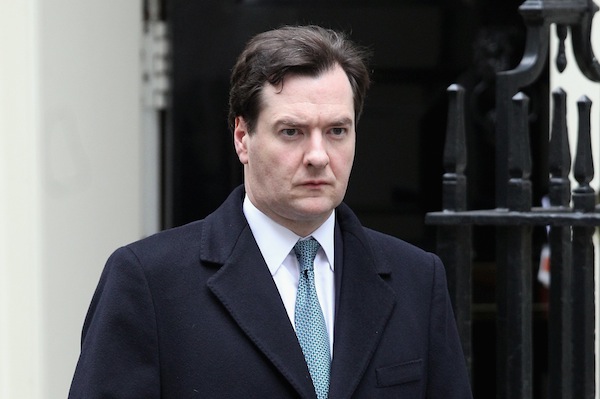 George Osborne’s main concern, however, are the poor suffering bankers:

But EU finance minsters in the Economic and Financial Affairs Council (Ecofin) are expected to approve last week’s proposals.

They include limiting bonuses to 100% of a banker’s annual salary, or to 200% if shareholders approve.

The City of London fears the rules will drive away talent and restrict growth.

Mayor of London Boris Johnson has dismissed the idea as “self-defeating”. London is the EU’s largest financial centre.

On Monday, a spokesman for Prime Minister David Cameron said: “We continue to have real concerns on the proposals. We are in discussions with other member states.”

But Mr Osborne’s bargaining power may be weakened further by Switzerland’s recent decision to cap bonuses paid to bankers and give shareholders binding powers over executive pay.

Now, I couldn’t care less about bonuses or pay in a free industry where success and failure are determined meritocratically. It is none of my business. If a successful business wants to pay its employees bonuses, then that is that business’s prerogative. If it wants to pay such huge bonuses that it puts itself out of business, then that is that business’s prerogative.

But the British financial sector is the diametrical opposite of a successful industry. It is a forlorn bowlegged blithering misshapen mess. The banks were bailed out by the taxpayer. They do not exist on the merits of their own behaviour. Two of the biggest are still owned by the taxpayer.  So I — as a taxpayer and as a British citizen — have an inherent personal interest in the behaviour of these banks and their employees.

In an ideal world, I would have let the banks go to the wall. The fact that the financial system is still on life support almost five years after the crisis began tells a great story. It’s not just that I don’t believe in bailing out failed and fragile corporations (although I do believe that this is immoral cronyism). The excessive interconnectivity built up over years prior to the crisis means that the pre-existing financial structure is extremely fragile. Sooner or later, without dismantling the fragilities (something that patently has not happened, as the global financial system today is as big and corrupt and interconnective as ever), the system will break again. (Obviously in a no-bank-bailout world, other action would have been required. Once the financial system had been allowed to fail, depositors would have to be bailed out, and a new financial system would have to be seeded and capitalised.)

But we do not live in an ideal world. We have inherited a broken system where the bankers (and not solely the ones whose banks are owned by the taxpayer — all banks benefit from the implicit liquidity guarantees of central banks) are living on taxpayer largesse. That gives the taxpayer the right to dictate terms to the banking sector.

Unfortunately, this measure (like many such measures dreamed up arbitrarily by bureaucrats) is rather pointless as it can be so very easily gamed by inflating salaries. And it will do nothing to address financial sustainability, as it does not address the problem that led to the 2008 liquidity panic — excessive balance sheet interconnectivity (much less the broader problems of moral hazard, ponzification, and the current weakened lending conditions).

But, if it is a step toward a Glass-Steagall-style separation of retail and investment banking — a solution which would actually address a real problem, and one advocated in the Vickers report — then perhaps that is a good thing. Certainly, it is not worth picking a fight over. The only priority Osborne should have right now is creating conditions in which the private sector can grow sustainably. Unlimiting the bonuses of the High Priests of High Finance has nothing whatever to do with that.

23 thoughts on “Save Our Bonuses!”