I tweeted on Friday morning:

I’m going to start work on a piece entitled “The Gold Bull Market Is Over”. I might be wrong, but it seems that way.

Unfortunately, I didn’t start writing immediately. But between then and now, the market fell to a new recent-low:

So, what’s up with gold? 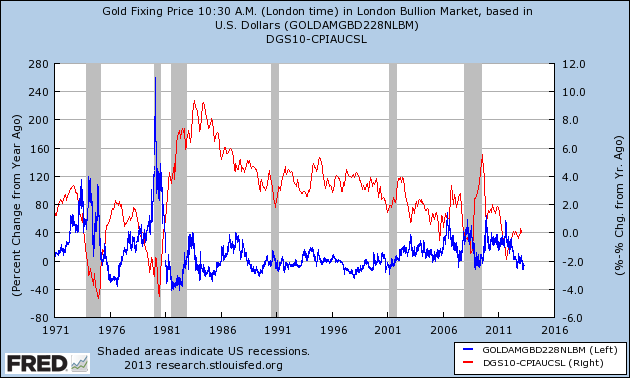 Right now they’re higher than they’ve been since 2011.

And a lot of gold buying has been based on the assumption that massive inflation is coming. Now inflation could really take off in the coming years. But the predictions that quantitative easing would heavily raise inflation (and thus lower the real interest rate) haven’t come true yet. That may well be because most of the quantitative easing money hasn’t really found its way into the wider financial system — banks are sitting on massive excess reserves. Or it may be because of the innate deflationary bias in the economy due to deleveraging effects. Eventually, so long as excess reserves are sitting there the chance of it multiplying out into the wider financial system and generating some significant inflation approaches 1. But for now, people who bought gold for inflation (or more accurately negative real interest rate) protection bought insurance against something that hasn’t happened yet. So nobody should be surprised to see a pretty significant selloff.

Of course, gold is lots of other things to purchasers. It’s a shiny tangible semi-liquid asset, and insurance against counterparty, financial system risks. BRIC central banks are still buying it, because they claim to want to insure against counterparty and financial system risks. Maybe in a few years if there’s another systemic financial crisis (something which is more likely than not) all that gold people were buying in the $1400s, and maybe $1300s or $1200s may end up looking super-cheap. But that would be a whole new bull market from the bull market that took gold from less than $300 in 1999 to over $1900 in 2011. The run is over. The price floor for gold in the medium-term without some intervening event like a massive financial crisis or a war or a global catastrophe is production cost. And right now, that’s just over $900.

And if there was a stock market crash or systemic crisis today (as some indicators are implying) gold’s price would almost certainly go down and not up as it did during the crisis in 2008 as gold-holders (e.g. hedge funds, investment banks) liquidate to cash to  settle other liabilities. Only afterward could we see significant gains.

Now, I think gold is an important part of the global financial system. The fact that it has retained its status as a store of purchasing power and as a kind of reserve currency for over 5,000 years is pretty amazing. That doesn’t mean that it’s immune to bear markets, though.

There were signs in 2011 that there was a psychological bubble in gold when a plurality of Americans named it the safest investment type.

For people holding physical gold as a long-term investment or insurance policy, all of this may be irrelevant. If your plan is to hold it until there’s a seismic shift in the global financial system, then this is totally irrelevant. An ounce of gold is an ounce of gold. On the other hand for people trading for dollar-denominated gains, the jig is up.

28 thoughts on “The Gold Bull Market Is Over”